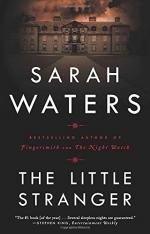 Sarah Waters
This Study Guide consists of approximately 70 pages of chapter summaries, quotes, character analysis, themes, and more - everything you need to sharpen your knowledge of The Little Stranger.

This detailed literature summary also contains Quotes and a Free Quiz on The Little Stranger by Sarah Waters.

The following version of the novel was used to create this study guide: Waters, Sarah. The Little Stranger. Riverhead Books, April 30, 2009. Kindle.

In The Little Stranger by Sarah Waters, Dr. Faraday became obsessed with Hundreds Hall, the home of the rich Ayers family, when he first saw it as a ten-year-old boy. The obsession stayed with him into his adulthood when he believed he might finally be making a name for himself among the rich families when he was called to the house to take care of a sick maid. Faraday was shocked when he saw the ruin of the house and its grounds but was still drawn to it as he made friends with Caroline and Roderick Ayers, and their mother. As the members of the family were overcome with what Faraday diagnosed as mental illness, Faraday’s obsession with the house and the remaining members of the family continued to grow even as the house became more dilapidated. Engaged to Caroline, Faraday believed that they would live happily at Hundreds Hall until Caroline told him she hated the house and did not want to stay there. The day before she was to leave the country, Caroline was found dead of an apparent suicide.

Faraday remembered a visit to Hundreds Hall as a ten-year-old boy when he, and other boys, received commemorative medals from Mr. and Mrs. Ayers. Because his mother had worked as a nursery maid there, she snuck Faraday into the house while she helped the staff wash dishes after the party. Faraday had been allowed to go upstairs with a parlormaid. When he was left alone, he pried a plaster acorn out of a decorative molding on the wall so that he could have a part of the house as a keepsake.

Faraday returned to the house thirty years later and was shocked by how dilapidated it had become. He treated a young maid who told him there was something bad in the house that scared her. Faraday did not take the girl seriously. Noticing Roderick’s limp, the result of a war injury, Faraday arranged to treat Roderick with new electric therapy with the agreement that Roderick would serve as a test subject. He got to know the family members as he visited regularly to perform therapy on Roderick.

The Ayers family invited Faraday to a party to welcome new neighbors to the area. The family’s situation began to deteriorate rapidly after that night. The child of one of the visiting families was bitten by Gyp, Caroline’s aging pet dog. The family insisted that Gyp be killed, a blow to Caroline. Worse, the nervous condition with which Roderick was diagnosed when he returned from war seemed to be returning. Roderick told Faraday that he believed the house was out to get him, that only he could keep it from hurting his mother and sister. One night, the room in which Roderick slept caught fire. The fires appeared to have been intentionally set. Faraday suggested that Roderick be sent to a mental institution.

After Roderick left, the house seemed to revolt with the call bell system ringing for no reason, the phone ringing in the middle of the night, and an unused speaking tube suddenly coming to life. Caroline and her mother followed knocks in the walls to discover strange groups of the letter “s” written on the walls. Mrs. Ayers believed they were signs from her daughter, Susan, who died as a child of diphtheria. Hoping that Mrs. Ayers was just becoming feeble minded in her advancing age, Faraday instructed Caroline to keep a close eye on her mother. It was during a discussion with Mrs. Ayers that Faraday watched as she started and he saw drops of blood appear on her shirt. Mrs. Ayers claims it was Susan, wanting her mother to join her in death. Fearing that Mrs. Ayers would hurt herself, Faraday arranged for Mrs. Ayers to be sent to a mental clinic but she killed herself on the day she was to go.

Following Mrs. Ayers’ death, Caroline broke off her engagement to Faraday. She told him that she felt he had an image of them living happily in Hundreds Hall together but she did not want to live there and hated the house. Faraday tried to convince Caroline that he loved her and wanted to be with her but was unable to change her mind. On the day that she was to leave the country, Caroline fell to her death from the third-floor stair landing of the house.

More summaries and resources for teaching or studying The Little Stranger.