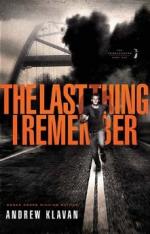 Andrew Klavan
This Study Guide consists of approximately 49 pages of chapter summaries, quotes, character analysis, themes, and more - everything you need to sharpen your knowledge of The Last Thing I Remember.

The Last Thing I Remember Summary & Study Guide includes comprehensive information and analysis to help you understand the book. This study guide contains the following sections:

This detailed literature summary also contains Topics for Discussion and a Free Quiz on The Last Thing I Remember by Andrew Klavan.

The Last Thing I Remember by Andrew Klavan is a tale of intrigue and mystery surrounding the main character, Charlie West. Charlie comes to consciousness strapped to a chair, aching and confused. He has no idea how he got there and though he struggles to remember, he can't make sense of any of it. He can hear men talking outside the door and his first impulse is to call out to them, but common sense reminds him that the voices must belong to whoever tied him to the chair to begin with. He listens, and hears his name mentioned, followed by their intention to kill him. He is close to panic, but remembers the words of Churchill - never give up.

The straps holding him are tight, but the leg of the chair has a metal flaw that is close to the restraint and he begins moving his leg up and down against it. The strap gives just in time, but escaping his captors is only the beginning of the nightmare that is Charlie's life now. Charlie manages to get away from the soldiers holding him, but that is where his luck ends since he is still unable to remember how he got there. He remembers snippets of the previous day, flashes of his karate demonstration at school, talking to Beth, and how she wrote her telephone number on his hand. After an amazing escape through underground caves, he meets a woman who agrees to give him a ride down the mountain. Cathy Simmons fears him at first, but Charlie manages to convince her that all he wants is to call his mother and go home. She offers him lunch and a telephone, but when Charlie calls home, the number is disconnected. Cathy suggests he call the police or, at the very least, allow her to call her husband who is an assistant district attorney. Charlie agrees, and after the call she seems more distant, but Charlie is tired. He accepts the offer of a shower and discovers that a full year has passed since the last day he can remember and when he gets out, to his surprise, he is arrested. Charlie's nightmare continues as he is told that he is an escaped felon, having been convicted of killing his best friend, Alex Hauser. They are taking him in to resume his sentence. A night in jail and a second escape send Charlie on a quest to stop the assassination of the secretary of Homeland Security, Richard Yarrow. Though Charlie manages to save Yarrow, he is unable to convince anyone that he was trying to save Yarrow, not kill him. He has no choice but to run for his life again, and hope he can unravel the mystery surrounding the last year of his life.

More summaries and resources for teaching or studying The Last Thing I Remember.

The Last Thing I Remember from BookRags. (c)2022 BookRags, Inc. All rights reserved.