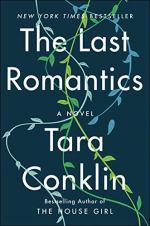 This Study Guide consists of approximately 42 pages of chapter summaries, quotes, character analysis, themes, and more - everything you need to sharpen your knowledge of The Last Romantics.

This detailed literature summary also contains Quotes and a Free Quiz on The Last Romantics by .

The following edition of this book was used to write this study guide: Conklin, Tara. The Last Romantics. New York: William Morrow, 2019.

In the year 2079, a famous 102-year-old poet, Fiona Skinner, fields a rare question-and-answer session in a world ravaged by environmental devastation. A question from an audience member causes Fiona to reflect on the autobiographical events that inspired her poetry.

In the year 1981, when Fiona was four and living in rural Connecticut, her father Ellis Skinner abruptly passed away at age 34 while at work in his dentists’ office. This left Fiona’s mother, Noni, alone to care for Fiona and her three other siblings: Joe, Caroline, and Renee (the oldest). For the next two or three years, Noni sank into a deep depression, nicknamed The Pause, rarely leaving her bedroom. This forced the children to fundamentally look after themselves, in particular led by Renee. During this time, Joe becomes a skilled baseball player in the local Little League. Ellis’ sister, Claudia, briefly moves to the house from Cleveland and helps Noni out of her depression.

Throughout the 1990’s, each of the children moves away from home in Connecticut, with Caroline eloping with her childhood sweetheart Nathan Duffy. Joe throws away his promise as a baseball player in college due to a partying lifestyle. In 2004, when Fiona is 27 years old, she is living in New York City and, while leading an aimless professional life, anonymously writes a popular blog about her prolific sexual adventures. At this time, Joe is also living in New York City, where he has become a successful businessman, and holds a large party to celebrate his engagement to the socialite Sandrine Cahill. Fiona writes and recites a poem at the party, but the partygoers, including Joe himself, rudely ignore her. A few weeks later, Joe’s life crumbles to a halt: he is accused of sexual harassment by his secretary, and punches his boss when he is informed he is fired. Shortly after, Sandrine leaves Joe.

Hoping to restart his life, Joe pursues a fresh start in the city of Miami. There, he starts a relationship with a young bartender named Luna Hernandez. Their relationship blossoms until one night, after a night of drinking, Joe appears to simply pass out on the floor. However, as Luna discovers days later, Joe in fact dies, at almost the exact same age his father Ellis had died. The three Skinner sisters travel to Miami to clean out Joe’s apartment, and discover a photo of the couple, and a large engagement ring Joe had purchased for her. Having not met Luna, Caroline and Fiona wish to gift the ring to her. Renee, however, secretly drives to the bar where Luna works, and yells at her from the bar and into the kitchen that she is guilty of murdering Joe. Caroline and Fiona sink in a considerable sum of money towards both a psychic and a private investigator to track Luna down, but they are unable to find any leads. Following these events, Caroline sinks into a depression and decides to split with her husband Nathan. Fiona runs into a man named Will she had a one-night-stand with during her blogging days, and they get married.

In the year 2022, Renee -- who is now in her early fifties -- decides that she will have a kid using artificial insemination: sperm from her longtime husband, Jonathan, and eggs from a deceased patient she treated as a doctor, named Melanie. Despite being married for nearly two decades, the commitment suddenly feels too dramatic for Jonathan, and he leaves Renee. As Fiona is planning a business trip to Seattle, she discovers a photo of Luna, now under an alias, on the website of a restaurant she now owns. Keeping it a secret from both Renee and Carolina, Fiona goes to meet Luna, with the engagement ring in-hand. Upon arriving, Fiona discovers that Luna is happily married, with a young toddler and another on the way. Suddenly, Luna’s first son, a teenage boy, Rory, arrives home: Fiona immediately knowns, due to the strong facial resemblance, that Rory is Joe’s son. Fiona quickly becomes awkward in the face of Luna’s self-confidence, as Luna politely refuses the gift of the ring. Fiona abruptly leaves.

As Fiona arrives back at her home in New York City, Renee has just given birth to her son, Jonah. The family is assembled in the hospital room as Jonathan suddenly returns, now willing to make a commitment to both Jonah and Renee. As the years go by, Fiona grows in stature as a published poet, and eventually each of the characters slowly pass away due to old age. When Will passes away, Fiona eventually remarries with the kindly Henry. Eventually, the timeline catches up to 2079, as Fiona and Henry make their way home from the question-and-answer session.

More summaries and resources for teaching or studying The Last Romantics.