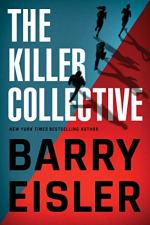 Barry Eisler
This Study Guide consists of approximately 48 pages of chapter summaries, quotes, character analysis, themes, and more - everything you need to sharpen your knowledge of The Killer Collective.

This detailed literature summary also contains Quotes and a Free Quiz on The Killer Collective by Barry Eisler.

The following version of this book was used to create this guide: Eisler, Barry. The Killer Collective. Thomas & Mercer, 2019.

This fast-paced novel centers around John Rain and Livia Lone; these two separate series by Barry Eisler, join together to create a story of loyalty, betrayal, and corruption within the U.S. government.

Rain, a self-proclaimed retired hitman specializing in "natural causes" is approached by a man in need of his services. The man refuses to reveal his identity, and says he needs three people taken care of: a female cop, a fed, and a consultant. Rain has a strict "no women and children" rule, and respectfully declines the offer.

Meanwhile, Livia, a Seattle Detective deep in an investigation called Child's Play that hunts members of a child-pornography ring, stumbles upon intel that incriminates members of the Secret Service. Her colleague, Trahan, realizes that the criminals are using a software that he developed for the Secret Service. Without warning, the operation is shut down by Special Agent Smith. Livia is furious, and storms out with a laptop containing sensitive information.

The following evening at one of Livia's women's defense classes, she is ambushed by two attackers. Livia is able to kill both attackers, and is fortunate to survive. After being interrogated by the police, she cannot help but think that this attack was related to the Child's Play investigation. Confirming her suspicion, the other two members of the Child's Play investigation die in an airplane crash that evening - events that were all too unlikely to be coincidental.

Rain meets up with his companion Larison in Virginia to pay Horton a visit. Horton (called Hort) was responsible for brokering the conversation with the unnamed man. However shortly upon their arrival, they are ambushed by flock of men through the driveway, and a helicopter from above. Narrowly escaping through a tunnel, the group flees to safety where Hort tells them that the person on the phone was Oliver Graham, a powerful man who runs an enterprise with the goal of taking over war operations from the American government.

Livia, still in the dark about her attackers, reaches out to a contact she has in Homeland Security by the name of B. D. Little. She fills him in on the bizarre nature of the shutdown, and asks if he can do some digging to see what he can find. He agrees and says he will report back. Soon thereafter, Livia reaches out to her friend Dox, a sniper that she worked with back in Bangkok. The two of them, who have a mutual romantic interest, decide it might be best to flee Seattle to work the case in private. Dox calls Hort, who happens to be with Rain and Larison, and fills them in on Livia's situation. As it turns out, Livia was one of the targets Rain was asked to kill, and Dox suggests the two groups join forces to take down Graham, and find out which members of the government are involved in the child-pornography ring.

Thanks to intelligence gathered from the team's acquaintances, they decide the best way to take down Graham is at a business dinner in Paris. Ben Treven, a former black-ops soldier who reported to Hort but now works for Oliver Graham Enterprises, informed the team that Graham would be traveling to Paris, and it would be a good time to ambush him. Tom Kazanaki, a CIA agent who runs a secret intel business on the side, confirms the details of the trip through his own channels. However in order for the plan to work, the squad realizes they need to add one key member to the team - Delilah.

Delilah, Rain's estranged lover and honeypot specialist, is the central piece of the operation. Graham has a blonde mistress in Paris who always attends business meetings to help encourage conversation. However, the last time Delilah and Rain spoke was when they separated. Rain does not want their first interaction to be about work. Seeing no other option, however, he reluctantly obliges.

After agreeing to meet in Paris, Delilah and Rain sit down to talk. Rain informs her of the situation, however it is clear that the two have a lot of tension. After arguing in the restaurant, the two go back to Rain's hotel and make love. Delilah, who meets Livia at the hotel, is shown the hurtcore videos that Livia has on her laptop, and she agrees to join the squad.

When the group arrives in Paris, they arrange a meeting with Ben to gather more intel on Graham's plans. Hort, the only member of the group who fully trusts Ben, meets with him alone as the rest stand guard along the street. However, the conversation is cut short when Delilah notices two military-looking men storming into restaurants. The team is able to shoot down a few guards before making it to the safe point, but Ben is shot in the process and dies on the bar floor. They discover the agents are part of a setup by OGE.

After the group poisons Graham's mistress, Delilah sits at Graham's favorite hotel bar. Staging a fight to get his attention, Delilah expertly hooks Graham with her charm and good looks. He invites her for a drink, and eventually to come join the dinner he is hosting the following night.

The next night, Delilah attends Graham's dinner and she exceeds his expectations. Graham insists the two of them go up to his room and enjoy a drink together. However, as per the plan, Delilah suggests that the two of them should go out and see the real Paris - a bar that the group picked out because it was on a one-way street with no exits. Graham agrees and the convoy makes its way to the bar in two different cars. The car in the front, transporting Graham, Delilah, the driver and one security guard is trailed by another car with three men inside. As the first car turns onto the street, Hort uses a radio frequency vehicle stopper to freeze the second car in the middle of the intersection. The group closes in and eliminates all the guards, and they drive away with Graham in the back of their van.

The group interrogates Graham and finds out that the coverup is much larger than they anticipated - three senators are involved in the ring, and Graham shows them all the proof they need to bring them down. Larison sees that they have everything they need and kills Graham on the spot.

After Paris, the groups all go their separate ways. Livia, after putting all the plans in motion, still feels a sense of emptiness without Dox, but the two have promised to see each other more. Delilah and Rain, however, leave Paris together, and return to his home in Kamakura where they enjoy their retirement.

More summaries and resources for teaching or studying The Killer Collective.