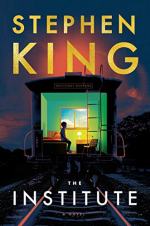 Related Topics
Bag of Bones
Black House: A Novel
Carrie
Cujo
Cycle of the Werewolf
Desperation
Different Seasons
Dolores Claiborne
Four Past Midnight
Gerald's Game
It
Misery
Nightmares & Dreamscapes
Night Shift
On Writing: A Memoir of the Craft
Pet Sematary
Roadwork
Salem's Lot
Skeleton Crew
The Dark Tower VI: Song of Susannah
Stephen King
The Dark Tower: The Wind Through the Keyhole
The Dark Tower Series
The Dark Tower VII: The Dark Tower
The Dead Zone
The Dark Tower II: The Drawing of the Three
The Eyes of the Dragon
The Girl Who Loved Tom Gordon
The Green Mile
The Dark Tower: The Gunslinger
The Long Walk
The Regulators
The Shining
The Talisman (King and Straub novel)
The Waste Lands
Wizard and Glass
Wolves of the Calla
Joyland
Mr. Mercedes
Finders Keepers
End of Watch
Gwendy's Button Box
The Outsider: A Novel
Elevation: A Novel
Doctor Sleep
If It Bleeds
Full Dark, No Stars
Later
Hearts in Atlantis
Everythings Eventual

Stephen King
This Study Guide consists of approximately 108 pages of chapter summaries, quotes, character analysis, themes, and more - everything you need to sharpen your knowledge of The Institute.

The Institute Summary & Study Guide includes comprehensive information and analysis to help you understand the book. This study guide contains the following sections:

This detailed literature summary also contains Quotes and a Free Quiz on The Institute by Stephen King.

The following version of the novel was used to create this study guide: King, Stephen. The Institute. Scribner, September 10, 2019.

In The Institute by Stephen King, a group of children kidnapped and used as conscripts in an illegal mind war use their unique abilities to free themselves and bring down the Institute. Although these children had been kidnapped for their telekinetic and telepathic abilities, the adults in charge of the Institute underestimated these abilities. When Luke Ellis, a twelve-year-old genius, was brought to the Institute, he started a movement not only to escape the Institute but also to close it down.

Tim Jamieson, a police officer forced to resign after a freak accident injured a civilian, decided to give up his seat on a plane bound for New York to a federal agent and hitchhike instead. He wound up in the tiny town of DuPray where he got a job as a night knocker. After handling an armed robbery and serious injury professionally, Tim was offered a job with the local sheriff’s department. He had still not come to a decision when his path crossed with Luke’s.

Luke, who was looking forward to starting college at both MIT and Emerson, was kidnapped and his parents killed by an extraction team from the Institute. He woke the next morning in a room that looked similar to his but did not have a window. Luke soon met Kalisha, a captive girl who gave him what information she had about the Institute and its purpose. The children knew that they had been taken because they had low levels of psychic ability but did not know what the Institute to do with them. Kalisha told Luke that after children were tested and given injections for several weeks in what was called the Front Half, they were sent to the Back Half and were never seen again. The goal of the doctors seemed to be to make the children see what they called Stasi Lights, or dots.

Through the course of Luke’s tests, he was slapped, shocked with a Taser-like apparatus called a zap-stick, and almost drowned. One shot made his throat close up. Dots projected on the wall caused him to suffer a seizure. Although well-behaved children were given tokens that they could use to get cigarettes, alcohol, snacks, and access the laptop computers in their rooms, Luke tried to avoid needing tokens. He tried to refuse having a tracking implant put in his ear and talked back to the adults who were in charge of the Institute.

Luke and Kalisha both had one adult they considered a friend in the Institute. Maureen was a housekeeper whom they helped in exchange for tokens. Kalisha learned through her telepathic abilities that Maureen was sick. She also had a pile of debt accrued by her ex-husband she wanted to rid herself of so she could leave money to her son, a boy she gave up for adoption when he was born. Luke helped Maureen hire a lawyer to take care of her debt. In exchange, Maureen helped Luke to escape. He wanted to expose the Institute and save his friends from what he believed was certain death in the Back Half. After Luke was safely off the Institute’s grounds, she hung herself, leaving behind a message that “HELL IS WAITING” (288).

Luke rode a train to DuPray, a town he thought was least likely to have someone from the Institute looking for him. When he jumped from the train, he ran into a signal post and was unable to escape. It was at this point that Luke and Tim met. Tim did not believe Luke’s story until Luke gave Tim a flash drive that Maureen had given him. Tim, the sheriff of DuPray, and the other officers watched in disbelief as Maureen talked about the Institute and then showed video of the Back Half where children used up by the Institute wandered like dementia patients and were treated like animals. Maureen claimed the abilities of the children were harnessed and used to end the lives of people believed to be dangerous to world peace. She feared by helping Luke escape that she had perhaps initiated the end of the world but felt indebted to help him.

Tim and the others believed Luke at this point, but it was too late because an envoy of former military on the Institute’s payroll arrived in DuPray. All of the officers with the exception of Tim and his girlfriend, Wendy, were killed by the team. Luke also survived the massacre. The only reason they survived was because the citizens of the town, led by Annie “Orphan Annie” Ledoux, opened fire on the Institute workers. Julia Sigsby, the director of the Institute, and James “Jim” Evans, one of the Institute’s doctors, survived.

Tim and Luke threatened Sigsby and Evans to the point that they directed them back to the Institute. They arrived in time to see the building levitating. The children inside had joined the power of their minds to overthrow the caretakers and break free. Avery Dixon, a ten-year-old with particularly strong telepathic abilities, stayed inside the building as it lifted and the came down, killing himself the majority of the children held captive inside. Avery believed his death was worthwhile because he died saving his friends, the first friends he had in his young life. Kalisha, one of Luke’s first friends at the Institute, was among the children who escaped.

More summaries and resources for teaching or studying The Institute.

The Institute from BookRags. (c)2022 BookRags, Inc. All rights reserved.