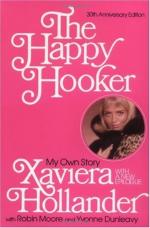 Xaviera Hollander
This Study Guide consists of approximately 31 pages of chapter summaries, quotes, character analysis, themes, and more - everything you need to sharpen your knowledge of The Happy Hooker.

This detailed literature summary also contains Topics for Discussion and a Free Quiz on The Happy Hooker by Xaviera Hollander.

The Happy Hooker is the memoir of Xaviera Hollander, a woman who eventually became known as a highly successful madam, or head of a brothel, in New York. The book chronicles her life from her childhood in Holland through the early 1970s, when she lived in New York and was involved in a commission on corruption in the city's government and police force.

Xaviera is a born in Indonesia to Dutch Jewish parents and lives through imprisonment in a Japanese concentration camp at a very young age. Her father, a doctor, exhibits the sort of sexual freedom and promiscuity that Xaviera will later display, while her mother insists that Xaviera remain a virgin until marriage. She shows an early interest in sexual experimentation with both males and females, including relatives. Xaviera loses her virginity to a boy at age seventeen and becomes sexually insatiable thereafter. After graduating from high school, Xaviera gains fame as the winner of a secretarial contest and works for a leading advertising agency. She begins experimenting with lesbianism at this time in her life.

Restless with what she believes are her home country's prudish tastes, Xaviera leaves Holland for South Africa to live with a stepsister. She falls in love with a man named Carl Gordon who lures her to New York on the promise of marriage and later rejects her, after which she becomes promiscuous to soothe her loneliness and depression and eventually transitions to a life of prostitution. She quickly moves up from turning tricks on her lunchbreak to working for some of the more well-respected establishments in the city. She loses two jobs in succession after being found out. She is blackmailed for photos of herself and Carl having sex and has her first experience with the seedier side of her new profession. She is arrested many times throughout her career but manages to get out on bail every time. She takes a trip to Puerto Rico after her boyfriend at the time, Paul Lindfield, breaks up with her after an arrest. She stays in Puerto Rico for several months, making money through prostitution and falling in with a crowd of young "hippies" who introduce her to mescaline and eventually steal all of her savings.

When Xaviera returns to New York, she is determined to make something of her life and sets out to become the most successful madam in the city. She learns how to recruit women for her brothel and becomes adept at handling her girls and her customers. Subsequent chapters are devoted to the everyday trials and details of life as a prostitute, from analysis into why women get into the profession to descriptions of the various types of "johns," men who hire prostitutes, and examples of the particularly bizarre fetishes some of them have. Xaviera talks about the business side of prostitution, explaining that she does it more for pleasure than for profit. She ends the book by going into detail about the toll her sexual appetites have had on her personal relationships and recounting the story of how her name became notorious through the machinations of a man named Abe the Bugger.

More summaries and resources for teaching or studying The Happy Hooker.