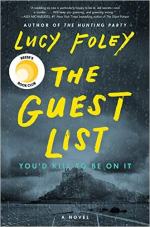 Lucy Foley
This Study Guide consists of approximately 65 pages of chapter summaries, quotes, character analysis, themes, and more - everything you need to sharpen your knowledge of The Guest List.

The Folly on Cormorant Island is the place where the special wedding guests stay during the wedding. The rehearsal dinner the night before the wedding takes place in the dining room of the Folly. After the wedding, Aoife asks Will to help her with the generator that she claims is near the Folly. She leads him to a spot between the Folly and the bog where she confronts him about his role in Darcey’s death and then kills him.

Inis an Amplóra aka Cormorant Island

Inis an Amplóra aka Cormorant Island is a fictitious island off the coast of Ireland. The island is rumored to be the location of a mass killing of members of a religious cult who took refuge there. Mattie tells Hannah and Charlie during the boat ride to the island that archaeologists found the perfectly preserved bodies of those massacred...

More summaries and resources for teaching or studying The Guest List.