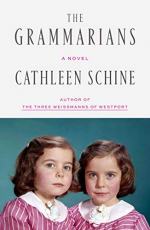 Cathleen Schine
This Study Guide consists of approximately 34 pages of chapter summaries, quotes, character analysis, themes, and more - everything you need to sharpen your knowledge of The Grammarians.

The Grammarians Summary & Study Guide includes comprehensive information and analysis to help you understand the book. This study guide contains the following sections:

This detailed literature summary also contains Quotes and a Free Quiz on The Grammarians by Cathleen Schine.

The following version of this book was used to create this study guide: Schine, Cathleen. The Grammarians. New York: Farrar, Straus and Giroux, 2019.

The novel follows the lives of two twin sisters: Laurel and Daphne. They are born in the early 1960s and raised by their parents in Larchmont, New York. From an early age, they take an interest in words and language, and their parents encourage that interest. They have a close bond as siblings, but there is also some tension and competitiveness between them in their childhood. They attend college together, and then they move to a small apartment in New York City after graduation. Laurel finds work as a kindergarten teacher at a private school, and Daphne finds work as a receptionist at newspaper called DownTown.

One day, for fun, the twins secretly switch places and go to each other’s places of work. Laurel, posing as Daphne, manages to acquire a job as a copyeditor for Daphne. Daphne is grateful, but also a little embarrassed that she did not acquire the job on her own. The sisters begin looking for romance in the city, and Laurel meets a kind and successful man named Larry. Laurel and Larry become engaged after about two years of dating. Soon after, Daphne becomes engaged to a man named Steven, whom she has only known for a short time. However, Daphne soon realizes that she does not love Steven, and she falls in love with a man named Michael. Daphne breaks off the engagement to Steven, and Daphne is soon engaged to Michael. The twin sisters have a double wedding.

At DownTown, Daphne is given the opportunity to write her own column. She calls it The People’s Pedant, and she writes about the use of words and language in the modern age. Meanwhile, Laurel soon becomes pregnant, and she decides to quit her teaching job in order to focus on taking care of the new baby, Charlotte. Daphne disapproves of Laurel’s decision to quit her job. Daphne’s column increases in popularity, and high-profile publications eventually begin asking Daphne to write articles for them. Daphne eventually becomes a staff writer at the New York Times. Daphne is happy about her success, and Laurel is jealous. Daphne eventually gives birth to a daughter, Prudence.

While taking care of Charlotte, Laurel continues to read in her limited spare time, and she becomes interested in vernacular speech and writing. She begins to find and read old documents, such as decades-old letters written by people she does not know. Laurel begins to create poems and stories out of lines taken from these old documents. Laurel’s work eventually gains notoriety and is published in high-profile publications. Daphne begins to grow jealous of Laurel, and their mutual jealousy begins to cause severe deterioration to their relationship.

The twins’ jealousy develops into a feud, and they soon barely communicate with each other. Their father eventually dies of illness and old age. Their mother takes some solace in the hope that the death may compel the sisters to reconcile, but they do not. Their mother changes her will to state that the sisters must have shared possession of the family dictionary, a prized possession. The novel ends ambiguously, without giving a clear answer as to whether the sisters ever reconcile.

More summaries and resources for teaching or studying The Grammarians.

The Grammarians from BookRags. (c)2022 BookRags, Inc. All rights reserved.