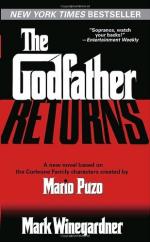 Mark Winegardner
This Study Guide consists of approximately 68 pages of chapter summaries, quotes, character analysis, themes, and more - everything you need to sharpen your knowledge of The Godfather Returns.

Don Forlenza's well-stocked, tiny island fortress is located on Lake Erie. During Prohibition, its proximity to Canadian waters was very useful; it's rumored to have underground tunnels leading to Cleveland. It was the setting of Michael's betrayal against Geraci, and it is also here where Nick hides out at the end of the book.

Hal Mitchell's Casino in the Sand

The casino is owned on paper by prominent Las Vegas businessmen, but is actually the property of the Corleone Family. Fredo spends several years alone here, in which he feels like an exile from the family, before Michael moves his family to Vegas. The initiation is held here.

None of the book is set in Cuba, but Cuba is one of the elusive dreams that Michael pursues. Having once owned profitable casinos in Cuba before Castro shut them out, Michael conspires with the C.I...

More summaries and resources for teaching or studying The Godfather Returns.