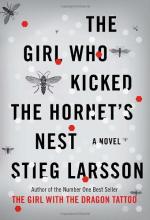 The Girl Who Kicked the Hornet's Nest Summary & Study Guide

The Girl Who Kicked the Hornet's Nest Summary & Study Guide includes comprehensive information and analysis to help you understand the book. This study guide contains the following sections:

This detailed literature summary also contains Topics for Discussion and a Free Quiz on The Girl Who Kicked the Hornet's Nest by Stieg Larsson.

Larsson's The Girl Who Kicked The Hornet's Nest is the third book in a trilogy. As such, the story picks up the day after the ending of The Girl Who Played With Fire. The book openly celebrates strong women, often referred to as warriors.

The story picks up just after Salander has defended herself against Alexander Zalachenko, her father. Zalachenko had shot Salander in the head numerous times. Miraculously, Salander was able to return the attack with an axe. Zalachenko was struck in the head and several other places although none of the wounds was fatal.

Zalachenko, a former Russian spy turned gangster, attempts to appear as a normal citizen and has even changed his legal identity to Karl Axel Bodin. However, the change in identity does little to fool anyone who has any knowledge whatsoever of Zalachenko and his bloodied past.

Dr. Jonasson treats Salander as he would any other patient. Jonasson has never performed such a delicate brain surgery before and must test his skills in an entirely new way. Even with the assistance of Ellis, Jonasson performs almost miraculously and saves the girl's life. Zalachenko also receives the best possible care despite his history of being a murderer, spy, and the one to almost kill his own daughter.

Mikael Blomkvist is somewhat of a reluctant hero. Blomkvist is on a quest to find out the truth about Salander and prove to the world that the young woman is not only innocent of the crimes she is accused of committing, she is also a victim.

Blomkvist has developed a protective attitude over Salander to the point of refusing to give certain information to the police. Blomkvist works tirelessly to prove Salander's innocence. Blomkvist has support at Millennium, including his lover, Erika Berger. Blomkvist also engages the help of his sister, Annika Giannini, an advokat.

Zalachenko realizes that his recovery is going to take much longer than he had expected. Still, Zalachenko is not one to rest on his laurels. Even while he is recuperating in the intensive care unit, Zalachenko is planning his defense and the disappearance and/or demise of Salander.

Unfortunately for Zalachenko, his former employer, the Section, has no plans to save him this time. Gullberg, the former director of Säpo's secret division, kills Zalachenko before turning the gun on himself.

During the majority of the story Salander is in the hospital recovering from the gunshot wounds. Salander must learn to rely on Blomkvist, Jonasson, the police and Giannini, at least in part, if she is going to be proven innocent of the triple murder in Stockholm.

While Blomkvist and Team Salander - including the police, Figuerola and others - wage a war on Salander's behalf, Salander writes her autobiography, a tome that will serve to have many people arrested and to share her fantastical story with the courts and perhaps, the public.

After a great deal of undercover work exposing the Section, Salander is set free.