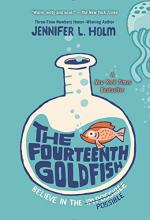 Jennifer L. Holm
This Study Guide consists of approximately 50 pages of chapter summaries, quotes, character analysis, themes, and more - everything you need to sharpen your knowledge of The Fourteenth Goldfish.

This detailed literature summary also contains Quotes and a Free Quiz on The Fourteenth Goldfish by Jennifer L. Holm.

Ellie is an 11-year-old girl who is having problems moving forward and finding her passion when her grandfather reenters her life as a 13-year-old boy due to his discovery of an age reversing formula. With his help, she finally understands the cycle of life, finds that science is her passion and starts to live.

One evening, Ellie is at home with her babysitter, Nicole, when her mother comes home with a strange 13-year-old boy. Finally, she realizes that the boy is really her grandfather, Melvin, something her mother already knows. He explains that a compound he made from an abnormal jellyfish caused him to transform from a 76-year-old man to his current state. Ellie's mother, Melissa, had had to pick him up at the police station because he was trying to get his work out of the lab and, since no one recognized him, he was taken in for trespassing. He tells Ellie that he has to figure out a way to get the T. melvinus out of the lab to continue his work and win a Noble Prize.

In the meantime, he has to live with Ellie and Melissa and attend Ellie's middle school. Being 13 years old in appearance, but having the mind of a 76 year old is not easy for Melvin. He has acne, knows more about science and history than his teachers, must adjust to middle school rules, and remembers when things, such as movies, were better. He also tries to play the father figure to Melissa, criticizing the way she dresses, her profession, her boyfriend, and her kissing in the driveway after a date. At the same time, however, he learns things that never registered with him during his original youth, such as the concepts that there is more to life than work and science and that drama is not a waste of time. He also learns the value of his unlikely allies, Ellie and a goth boy, Raj. Ellie helps him adjust to teenage life. She lends him acne cream and ponytail holders for his long frizzy hair. Together, Ellie and Raj make him aware of school rules and, due to them, he always has someone to eat with at lunch. Ultimately, with their help and imagination, he's finally able to obtain what he needs to continue his research and get a step closer to achieving his dream of winning a Nobel Prize.

With the prize in reach, however, Melvin decides to trash his findings as a result of Ellie's counsel. Through him she's realized that science is her passion, but she also understands the impact, both positive and negative, of scientific findings and realizes that some results may be better left unknown for the sake of mankind.

Melvin finally decides to move on and tour the country by bus, an unfulfilled dream of Ellie's deceased grandmother (Melvin's wife). Ellie embraces new friendships and the concept of discovery. Melissa finally marries her longtime boyfriend and the family looks to move to a new house.

More summaries and resources for teaching or studying The Fourteenth Goldfish.