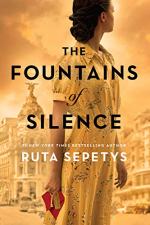 Ruta Sepetys
This Study Guide consists of approximately 75 pages of chapter summaries, quotes, character analysis, themes, and more - everything you need to sharpen your knowledge of The Fountains of Silence.

The Fountains of Silence Summary & Study Guide includes comprehensive information and analysis to help you understand the book. This study guide contains the following sections:

This detailed literature summary also contains Quotes and a Free Quiz on The Fountains of Silence by Ruta Sepetys.

Ana Torres Moreno is an employee at the Castellana Hilton, a high-end hotel in Madrid in 1957. She lives in a very poor neighborhood, Vallecas, with her family. Julia, Ana's older sister, is married to Antonio. Julia and Antonio have an infant daughter named Lali. Rafa is Ana's older brother. Ana's parents were teachers who fought against the fascists during the Spanish Civil War almost two decades earlier. The country is under the rule of dictator Francisco Franco and people have few rights or freedoms. People like Ana's family, still under the pall of parents who fought against Franco, live in constant fear.

Daniel Matheson is the son of a wealthy oil tycoon Martin Matheson and a Spanish woman, Maria Matheson. He was born and raised in Dallas, Texas, but his mother immersed him in the Spanish culture of her ancestors. When Daniel is 18, having just graduated from school, he and his parents make a trip to Madrid. Martin is in the country to close an oil deal with Franco. During the visit, Daniel learns that his mother has been ill and recently miscarried. By the time they leave the country, his parents have adopted a little girl they named Christina.

Christina is known as baby 20 116 in the Inclusa, an orphanage where Ana's cousin, Puri, works with children. Puri loves her work and considers it an honorable calling, but she has always been curious about things her mother says are better left alone. When Puri finds herself alone in the records room, she discovers that the orphanage is charging extremely high adoption fees. She also learns that there are some parents who question whether their child really died, or if there might have been some mistake. Puri never reveals what she learned, but Daniel later learns that Christina and Lali are twins. Furthermore, he learns that officials told Julia and Antonio their daughter had died. Though the truth of why officials took the child is never revealed, it seems likely that both are being punished for the acts of their families during the civil war.

Ana knows that she has to be extremely careful to survive in the terrible situation under Franco. Women have no freedoms or rights, and even the impression of impropriety can prompt an official designation as a prostitute, along with punishment. Despite that, she gives in to her feelings for Daniel and spends some time with him. Daniel wants them to be together, but he is aware of the dangers Ana and her family face. An aspiring photographer, Daniel has taken some pictures in Madrid that the government would not approve, and he knows he could be punished for them. However, he feels relatively safe because of his American citizenship and his family's friendship with the American consulate. Daniel becomes friends with Ana's brother, Rafa, who spent years in brutal conditions after his parents were killed. Rafa developed a brother-like friendship with Fuga there, and he sets out to help Fuga's dream of becoming a matador come true. To reach that dream, Fuga begins illegally training with bulls. Fuga attracts the interest of a promoter but feels the need to continue his illegal practicing. In the field. Fuga is shot, and Rafa arrested.

Meanwhile, Ana is fired, accused of stealing a book. Daniel actually gave it to her, but she cannot make that claim because their relationship is forbidden. Daniel feels responsible for Ana's firing and partly responsible for Fuga's death and Rafa's arrest. However, friends convince him that a mole among the hotel staff is really to blame. Ana sends word that he should not seek her out, and he accepts her at her word. He becomes a famous photojournalist, though he returns to Dallas to help raise Christina after Maria's death. Eighteen years later, Daniel and Christina return to Madrid where everyone immediately recognizes Christina as Lali's twin sister and where Daniel and Ana immediately pick up their relationship. Though they know the situation will be complicated, they agree that Christina should someday be told the truth. Daniel and Ana pledge to live their lives together.

More summaries and resources for teaching or studying The Fountains of Silence.

The Fountains of Silence from BookRags. (c)2022 BookRags, Inc. All rights reserved.