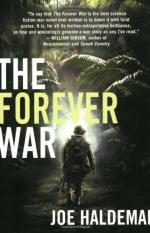 Joe Haldeman
This Study Guide consists of approximately 58 pages of chapter summaries, quotes, character analysis, themes, and more - everything you need to sharpen your knowledge of The Forever War.

This detailed literature summary also contains Topics for Discussion and a Free Quiz on The Forever War by Joe Haldeman.

The Forever War by Joe Haldeman is a classic science fiction story of William Mandella, a man who is in the top percentile of the world as far as intelligence, education, and physical fitness. As a result, he is included in the elite group of people conscripted into the united armed services of the world to battle the unknown and elusive Tauran aliens. Although this war spans over a millennium, Mandella unwittingly sees it through from beginning to end due to the time differential created by travel through constantly evolving wormholes. Not only is The Forever War an intense, mind-bending space chronicle, it is also a social commentary regarding war, politics, and how executive decisions affect civilians and military personnel alike.

Mandella is among the first that will face the Taurans, and since very little is known about this sworn enemy, military training involves a wide variety of environments and procedures as the humans attempt to prepare for anything. In addition, the majority of the preparation takes place in sub-zero temperatures because the planets the strike force is trying to secure are all near the newly discovered collapsars—stars that provide no heat. Mandella and his fellow recruits feel as though much of the training is pointless, but are not in any position to argue since capital punishment is the normal consequence for not following orders. The mission itself is successful and takes only a few months to complete. However, due to time dilation, they return home to an Earth that has been transformed into a highly violent and aggressive place. Mandella has difficulty with how much his mother has aged, not to mention the fact that she is involved in a relationship with another woman, demonstrating the global acceptance of alternative sexual orientations in order to control overpopulation. Mandella and his lover, Marygay Potter, feel isolated and alienated from this new society. Mandella's mother dies since her importance to society was rated zero on her seventieth birthday. The zero rating means that she is not relevant enough to merit any form of medical care. While Mandella is visiting Marygay's family at a commune in South Dakota, both of her parents are brutally killed by raiders. Although they had wanted nothing more than to get out of the military, they quickly decide to return as soon as possible. Marygay and Mandella agree that it is preferable to have a single enemy in the face of almost certain death as opposed to constantly being surrounded by different enemies.

Despite the fact that they had been promised easy assignments, both Marygay and Mandella are appointed combat platoons in short order. During this tour of duty, both of them are severely injured, Mandella losing a leg and Marygay an arm. During the months it takes to get to Heaven, the military resort planet, they are both prepped for what their lives will be like after their amputations. However, once they arrive, due to the time dilation, methods have already been developed to assist people in growing new limbs. After their time spent together in recovery they are given their next assignments. To their dismay, they are to be separated. It has been over two hundred years since the war began and since they are to be traveling in opposite directions, it is likely that they will never see one another again. Both Mandella and Marygay attempt to contest their orders, but to no avail. They share farewells and fly off to battle.

By the time Mandella reaches the launch location of his mission, a three-week, virtual reality crash course called the "can" has been created. The "can" injects a user's brain with every bit of information deemed valuable for the Major of a Strike Force in the year 2458. Mandella's training takes place in a gas-filled tank and includes the use of every weapon ever invented, the history of every battle ever fought, along with military facts, figures, and theories. When Mandella is inserted back into the military, he finds himself the exception on many different levels. First, and most noticeably, he is the only heterosexual in his company. Additionally, Mandella is literally hundreds of years older than his subordinates, which not only creates a mutual culture shock, but requires everyone in his company to learn how to speak and understand his dialect.

Mandella leads his Strike Force to a freezing planet circling a dull star where they build a base in preparation for the Tauran attack. The Taurans finally arrive and all but demolish Mandella's company, partially because his subordinates do not follow his orders. The surviving personnel head home to Stargate on a ten-month journey to discover that it has, once again, completely changed. Not only is Earth now a planet made up entirely of clones with a single consciousness, but the war has been over for two centuries. Part of their welcome home is an explanation of the 1,143 year-long war that summarizes the idea of the whole thing being based on a misunderstanding between Earth and the Taurans. Upon further exploration, Mandella discovers that the leaders at the time believed that Earth needed a war to unify its people. The returnees are informed that they are free to decide where to live, what do, and with whom to do it. Mandella finds a note in his personnel file from Marygay in which she informs him that she has been waiting for him by using a space cruiser as a time machine. Utilizing time dilation to her benefit, she has been traveling several light years and back over a period of a month, and when she returns, five years have passed. Mandella and Marygay have their first child, a boy, approximately 1,146 years after they first met.

More summaries and resources for teaching or studying The Forever War.