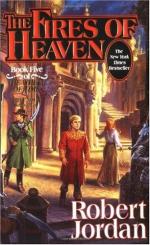 Robert Jordan
This Study Guide consists of approximately 52 pages of chapter summaries, quotes, character analysis, themes, and more - everything you need to sharpen your knowledge of The Fires of Heaven.

The Fires of Heaven Summary & Study Guide includes comprehensive information and analysis to help you understand the book. This study guide contains the following sections:

This detailed literature summary also contains Topics for Discussion and a Free Quiz on The Fires of Heaven by Robert Jordan.

Elaida do Avriny a'Roihan is the new Amyrlin Seat and she is intent on two things, tracking down the rebel Aes Sedai that oppose her rule and bringing Rand Al'Thor, the Dragon Reborn, under the control of the White Tower. The Forsaken have their own plans for Rand. They intend to bait him into attacking one of their number, Sammael. If Rand does so, he will walk straight into a trap set by three others, Rahvin, Lanfear, and Graendal.

Siuan Sanche, the recently deposed Amyrlin Seat, sets off across the land in search of the seat of the rebellion. Min Farshaw, Leane Sharif, and Logain travel with her to the hidden city of Salidar, where the rebellion has set up a "Little Tower" to oppose Elaida. Siuan and Leane convince the rebels to begin the process of choosing a new Amyrlin to make their opposition to Elaida official.

Nynaeve al'Meara, Elayne Trakand, Thom Merrilin, and Juilin Sandar sneak out of Tanchico to begin their journey back to the White Tower and continue their hunt of the Black Ajah. After they are drugged and almost captured by a spy for the Yellow Ajah, they learn about the coup in the White Tower and resolve to locate the sisters of the rebellion. Nynaeve meets with Egwene in Tel'Aran'Rhiod, and together they investigate the papers of Elaida and her keeper Alviarin. They learn that Siuan and Leane have been stilled, an order for the arrest of Moiraine has been issued, and Elaida has announced an amnesty for any sisters who will return to the Tower and accept her rule. Nynaeve also learns the location of the rebellion. Nynaeve and Elayne arrive in Salidar and the sisters of the Little Tower waste little time in returning them to their status as lowly Accepted.

Rand Al'Thor has been given pledges of loyalty by several of the Aiel tribes. The Shaido, led by Couladin and Sevanna still resist, and have begun an invasion of Cairhien, with Couladin posing as the Dragon Reborn. The Shaido lay siege to Cairhien but Rand and his force of loyal Aiel break the siege. Mat Cauthon plays a leading role in the battle and kills Couladin. Rand is welcomed by the nobles of Cairhien but refuses to take the throne, stating that it belongs to Elayne Trakand.

A rumor arrives in Cairhien that Rahvin has killed Queen Morgase and now rules Caemlyn. Rand resolves to attack Rahvin and avenge Morgase, while at the same time securing Andor for Elayne. Before he sets off, Lanfear, furious when she learns about Rand's affair with Aviendha, attacks Aviendha and Egwene, forcing Rand to defend them. Moiraine intercepts Lanfear and manages to pull both Lanfear and herself through the ter'angreal to the world of the Aelfinn that Mat had used in Rhuidean. Lan can no longer feel Moiraine's presence and concludes she is dead.

Rand confronts Rahvin in Caemlyn and the two soon slip into Tel'Aran'Rhiod, dueling. Nynaeve captures another of the Forsaken, Moghedien, in Tel'Aran'Rhiod and, using a device to control Moghedien's ability to channel the One Power, uses the Forsaken to help Rand defeat Rahvin.

More summaries and resources for teaching or studying The Fires of Heaven.

The Fires of Heaven from BookRags. (c)2022 BookRags, Inc. All rights reserved.