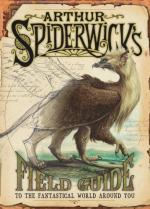 Holly Black
This Study Guide consists of approximately 29 pages of chapter summaries, quotes, character analysis, themes, and more - everything you need to sharpen your knowledge of The Field Guide.

This detailed literature summary also contains Topics for Discussion and a Free Quiz on The Field Guide by Holly Black.

The book's playful opening tells of the author's affection for faeries and promises the reader that real faeries are going to make their appearance in the story. Jared, a boy aged about eight or nine, feels confused as he moves into an old Victorian house along with his twin brother Simon, his older sister Mallory and his mother Helen Grace. His father has just moved away and is not with the family. Jared had been getting into fights at school and Mom hopes that he will have a brand new start now. The spooky atmosphere of the family's new home is hinted at from the beginning because the house is large but in poor shape and great-aunt Lucinda who owns the house is now in a mental asylum. Just in the house, the children hear the sound of something squeaky in the walls, and take a guess that it is a squirrel. The two twin boys share a bedroom, with Simon setting up aquarium containers with mice and other small animals. The first evening Mallory comes into the boys' room complaining that she hears the squirrel noise again. The Grace children investigate downstairs, and after hearing the noise again, Mallory hits open the wall and they find a sort of nest with odd objects in it, such as newspaper clippings and a string of roaches.

For further investigation, Jared goes upstairs on a small dumbwaiter and finds a sealed-in library. He takes a note that has a poem hinting to a special secret in the house. Jared hears a noise and sees a new dust trace of writing, warning him to beware. Mom comes home, and only later is Jared able to be taken down the dumbwaiter again. In the morning, Mallory's hair is tied in pigtails to the bed post and she has bruises on her arms. Mom suspects that Jared did it, while Jared thinks the creature that they have been following did it. He goes up the stairs past the attic to a little room, trying to follow clues in the poem he has. He finds a book called The Field Guide, detailing the habits of a whole bunch of faeries and other creatures. Jared shows the book to his older sister, but she dismisses it as baby stories.

The next night, after reading most of the book, Jared goes to the kitchen and leaves out flour to get a trail of the creature, who Jared suspects is a boggart. Jared must go upstairs when his mother comes out. In the morning, Simon has bruises and the kitchen is a mess. In addition, Simon's tadpoles have been frozen into ice cubes, and Simon's pet mice are missing. Mom is beginning to suspect that Jared has gone mad. Jared finds the remains of the creature's old nest, and decides to rebuild it in a bird house. After much tension, Jared gets his siblings to help him go up the dumbwaiter and bring up the birdhouse nest for the boggart. A door is discovered and all three children examine the library. After this, things are quiet for about a week. When Mom goes out shopping, the three children go back up to the library. There they finally meet the boggart, who, while thanking them for the new house, warns them to destroy the field guide book, or else they are in danger.

More summaries and resources for teaching or studying The Field Guide.