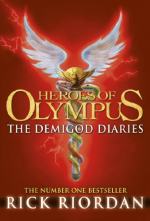 A very prevalent theme in the story entitled, “The Diary of Luke Castellan” is one of abandonment. Luke is only 14-years-old and has been on his own since he ran away from his mother’s house five years before. He was very unhappy at home because his mother was distraught that Luke’s father, Hermes, Messenger of the Gods, had dumped her.

Luke’s mother was not emotionally equipped to raise a child by herself. Luke felt abandoned by both parents and took off on his own. Luke didn’t make very many friends among the mortals. As soon as they learned that he was a demigod, they either didn’t believe him or thought he was freakish and the friendships ended. The only friend that Luke had was Thalia.

Thalia is the demigod daughter of Zeus. She has a tale that is very similar to...