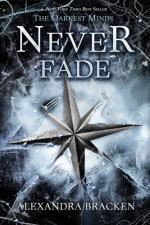 Related Topics
The Darkest Minds
In the Afterlight
Through the Dark
Lore
Lore: A Novel

Alexandra Bracken
This Study Guide consists of approximately 63 pages of chapter summaries, quotes, character analysis, themes, and more - everything you need to sharpen your knowledge of The Darkest Minds.

This detailed literature summary also contains Quotes and a Free Quiz on The Darkest Minds: Never Fade by Alexandra Bracken.

The following version of the book was used to create this study guide: Bracken, Alexandra. The Darkest Minds: Never Fade. New York: Hyperion, 2014.

Ruby Daly is a teenage girl with the power to control the minds of other people. By the time she was 10 years old, American children had died off in alarming numbers due to a mysterious disease called IAAN (Idiopathic Adolescent Acute Neurodegeneration), and almost every child who remained was imbued with different supernatural powers. Ruby, unaware of what she could do, accidentally erased herself from her parents' memories. Her parents did not recognize her and sent her to a prison camp where children with abilities were kept. Ruby remained there until a member of and organization called the Children's League broke her out. She initially refused to be part of that group, fearing that they had lost sight of the need to get the children out of the camps, but circumstances forced her to join them.

By the time this novel opens, Ruby has been named a leader of her group at Children's League. An agent named Cate is the supervisor of Ruby's group, which includes Jude, Vida, and Nico. Typically, Jude and Nico provide computer support from the Children's League headquarters in Los Angeles. Jude has a bubbly, caring personality, and he worries constantly about his friends. When Ruby returns from a mission, Jude is always waiting to greet her, ensuring that she is alright and that he has not lost another person in his life. Jude is 14 years old as the novel opens, but he is naive and immature. He and Nico overhear some adult agents of the Children's League planning to eliminate some of the children in an effort to shift the organization's focus on overthrowing the government. When he and Nico have proof that an agent killed one of the young boys of the League, Ruby knows that she has to take action. She fears going directly to any of the adults because she cannot be certain that any of them are trustworthy.

An agent named Cole Stewart is rescued from the hands of the government soldiers and returned to the League. Cole is just a few years older than Ruby and is the brother of Liam, the boy Ruby loves. Cole found evidence of IAAN's origin but Liam accidentally took it. With Cole's help, Ruby plans to sneak away and find Liam. Unexpectedly, Jude gets sent with her on her next mission and she has no choice but to take him along. Cate figures out what is happening and sends Vida to help. By chance, they meet up with Chubs, a boy Ruby knew before she returned to the League. Chubs helps them reach Tennessee where they find Liam, who is near death in a camp run by rogue children. Ruby and Vida defeat the camp's leader and set the children there on a new path where they will all have a better chance of survival. Ruby, Vida, Jude, Liam, and Chubs leave Tennessee but are intercepted by Clancy Gray, the son of the American President. Clancy leads them to believe they have coerced him into going with them to California, where the rogue agents have overthrown the Children's League, but he actually has an ulterior motive.

Once they enter the League headquarters, they find that Cate has already created a plan to rescue the children being held by the rogue League agents. Ruby loses track of Clancy and finds he is in the administrator's office, trying to destroy some files. Ruby saves most of the paperwork just before President Gray bombs the city, including the League headquarters. Some children die in the explosions, including Jude. Clancy miraculously survives and the others discover the paperwork includes a cure for IAAN. Clancy has gone to great lengths to keep the cure secret, including killing his own mother – the professor who found the cure. Clancy embraces his power and does not want to lose it. The novel comes to a close with the children huddled outside the League headquarters, hoping to find a way to leave the city without losing more of their members.

More summaries and resources for teaching or studying The Darkest Minds: Never Fade.