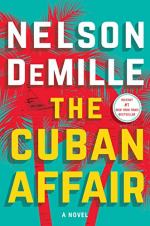 DeMille, Nelson
This Study Guide consists of approximately 95 pages of chapter summaries, quotes, character analysis, themes, and more - everything you need to sharpen your knowledge of The Cuban Affair.

This detailed literature summary also contains Quotes and a Free Quiz on The Cuban Affair by DeMille, Nelson.

In Chapter 1, the novel opens as the main protagonist Daniel “Mac” MacCormick sits and waits for Carlos in the Green Parrot bar in Key West. In Chapter 2, Carlos arrives and proposes to hire Mac and his boat for a cruise to Cuba for a fishing tournament. Mac at first accepts but Carlos says there is more to the situation and Mac almost leaves but Carlos tells him there is $2 million on the table for Mac. In Chapter 3, Carlos explains more of the idea - that Jack (Mac’s first mate) will sail the boat to the east of Cuba while Mac flies to Havana with Carlos’s client. He will then board the boat in Cayo Guillermo with $60 million. In Chapters 4 - 6 Mac prepares his boat The Maine, and tells Jack the basic outline. In Chapter 7, Carlos and his clients Eduardo and Sara board the boat and they watch the sunset, Mac skeptically agreeing to hear more.

In Chapter 8, Eduardo and Sara explain their Cuban histories. Sara explains her grandfather was a banker in Cuba and before the fall to Castro, hid the money, land deeds, jewels, and $60 million American dollars in currency in a cave near Cayo Guillermo, and only Sara knows the location. In Chapter 9, she explains how she and Mac will join a Yale educational tour group of Cuba. In Chapter 10, Mac talks to Jack about the mission and he agrees. Part 1 ends as Sara and Mac toast to the mission on The Maine.

In Chapter 11 and 12, Mac flies to Cuba with the Yale tour group. He has sold The Maine to Carlos, and Jack is prepared to meet him with Felipe in Cuba. In Chapter 13 they go through customs, though Sara gets a hard time for carrying Cuban pesos. In Chapter 14 they drive through Havana, and in Chapter 15 Sara goes through more logistics and tells Mac they will soon be sleeping together. In Chapters 16 they arrive at their hotel, Parque Central, and in Chapter 17 they have dinner and meet Antonio, their Cuban guide whom they suspect is a chivato. In Chapter 18, Sara and Mac discuss the contact they are supposed to meet in Havana who will help them get to Cayo Guillermo.

In Chapter 19 and 20, Mac and Sara tour Hemingway’s house and a farm together with the Yale group. Antonio starts to make it clear he is watching them. In Chapters 21 - 23, they get dinner and leave the group for a walk. Soon they start drinking and end up having sex, in a different hotel than the group. In Chapter 24, Sara tells Mac she has a boyfriend, and that there is more to the treasure than he knows. They return to the Parque Hotel and Antonio sees them. In Chapter 25 - 27, they tour Havana, and Sara points out her grandfather’s former bank and mansion.

In Chapter 28, they continue on the tour, and Antonio tells them to meet him tomorrow night. In Chapter 29 and 30 they tour Havana and consider Antonio’s offer, and they are worried. In Chapter 31, Mac meets Jack, who gives him a gun. In Chapter 32, Sara and Mac consider ditching the plan early and joining Jack. In Chapter 33, Jack confirms the fishing tournament is on and he is headed out of Havana. In Chapter 34, Mac and Sara meet Antonio at the bar.

In Chapter 35, they meet Antonio and he tells them they are in grave danger with the police, and he can get them out of the country, for $1500, the rest of Sara’s pesos, and if Sara sleeps with him. In Chapter 36, Mac and Sara discuss this, and in Chapter 37 they decide to leave the dollars for Antonio, but get on with their plan that night. In Chapter 38, their contact approaches them with an address. In Chapter 39, they eat dinner and leave the tour group. In Chapter 40, they visit Villa Marista prison where 17 american POWs were tortured. In Chapter 41, they go to the address to get their car for Camaguey, but in Chapter 42, Eduardo shows up giving them two trunks for the car and telling them they are not going to Camaguey, only Cayo Guillermo. Part 2 ends as Mac learns that one trunk contains deeds and titles, the other contains the bones of the seventeen POWs.

Section 3 begins. In Chapters 43 - 47 Sara and Mac drive to Cayo Guillermo with the skulls and deeds in the car. In Chapter 48 they arrive. Sara confesses that Felipe is their contact that night at the Melia bar, and that he is her boyfriend. In Chapter 49, Mac takes a nap on the beach. In Chapters 50 - 52 Sara, Mac, and Felipe meet to talk about logistics of meeting the boat, loading the trunks, and going home. In Chapter 53, Sara and Mac get the trunks onto The Maine with the help of Jack and Felipe, in the midst of heavy back and forth gunfire, and they start to steer towards home.

Section 4 begins. In Chapter 54, the Maine is chased down by two Cuban patrol boats and eventually struck until it is about to sink. As they prepare to tip the trunk of skulls into the ocean, two Black Hawk helicopters swoop down and save Jack, Mac, Felipe, and Sara. In Chapter 55, Mac is back safely in Key West a few days later, thinking about going home to Maine. As he begins to think through his trip, he sees Sara and the novel ends as they embrace.

More summaries and resources for teaching or studying The Cuban Affair.