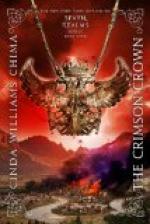 Cinda Williams Chima
This Study Guide consists of approximately 32 pages of chapter summaries, quotes, character analysis, themes, and more - everything you need to sharpen your knowledge of The Crimson Crown.

The Crimson Crown is the fourth novel in the Seven Realms Series by Cinda Williams Chima. In this novel, Raisa has taken the throne of the Gray Wolf Queen and Han has become a member of the Wizard Council. Raisa is under pressure to marry, which she has conceded will be for political reasons and not romantic ones. However, she is unaware that Han is doing all that he can to find a way in which to make a marriage between them acceptable to both the clans and the Flatlanders. As Han fights to get what he wants most, Raisa, he finds himself struggling against foes who might prove much more powerful than he. The Crimson Crown is a tense-filled conclusion to the Seven Realms Series that will leave readers more than satisfied.

Raisa has become the Gray Wolf Queen. Her family and her enemies are all anxious to see who she will choose as her husband. Raisa has already turned down several offers, including marriage to the king of Arden, a neighboring territory. Now Raisa finds herself faced with a proposal from childhood friend, Nightwalker, but unable to accept even though she knows it is a marriage her father strongly champions. Instead, Raisa finds herself still longing for Han and wishing there was a way in which it would be acceptable for her to marry a wizard.

Han has been appointed to the Wizard Council as Raisa's representative. However, Han knows he has enemies on the council and uses all caution when he travels to attend his first meeting. At this meeting, there is discussion about murders of wizards that have been taking place in Ragmarket, Han's childhood home. Gaven Bayar, the High Wizard, practically comes out and accuses Han of committing these murders. At the same time, the council decides to postpone the election of a new High Wizard.

Han speaks to Raisa and tells her that he has begun investigating the murders on his own. At this same meeting, Raisa asks Han to run for High Wizard. Raisa need someone she can trust to be High Wizard to help her try to unite the wizards and the clans. Han agrees. To this end, Han attempts to make an uneasy alliance with Fiona Bayar by agreeing to help her kill Raisa in exchange for Fiona convincing one of the members of the council, Adam Gryphon, to vote for Han as High Wizard. This conversation however is overheard and the evidence of this conversation is presented to Raisa. Raisa does not believe it, but this discovery leads to more evidence pointing at Han as responsible for the murders.

Raisa and Han meet in secret. Han tells Raisa the truth about his uneasy alliance with Fiona. At this point, Han has been elected High Wizard, but he is wanted for murder. For this reason, Han has decided to find the wizard arsenal, something that is thought to be a legend, but which Han's ancestor Crow claims he can help him find. Han is successful in finding the arsenal, but is caught in the tunnels under Gray Lady by the Bayars. Han is taken captive and tortured as Gaven Bayar tries to force him to reveal where the arsenal is.

As Han is kept prisoner, a rebellion breaks out in Fellsmarch. Raisa is captive in her castle as her rogue general waits for the Arden army to join his attack on the castle. Micah Bayar finds his way into the castle and tells Raisa that Han is dead. Micah then convinces Raisa to promise to marry him if he can raise an army of clansmen and wizard to help free Fellsmarch. However, Han manages to break free of the Bayars, killing Gaven, and he leads the rescue of Fellsmarch.

In the aftermath of the siege on her castle, Raisa receives a note from Han that tells her has identified the killer of the wizards in Ragsmarket. Raisa goes to meet him only to discover it is a trick by Nightwalker. Nightwalker has been killing wizards and making it appear that Han was responsible. Nightwalker also admits to killing Raisa's mother and tells her he plans to kill her as well. Raisa manages to escape with the help of Night Bird, Nightwalker's lover. A short time later, Raisa and Han are married.

More summaries and resources for teaching or studying The Crimson Crown.

The Crimson Crown from Gale. ©2005-2006 Thomson Gale, a part of the Thomson Corporation. All rights reserved.