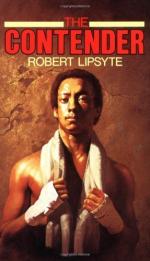 Robert Lipsyte
This Study Guide consists of approximately 57 pages of chapter summaries, quotes, character analysis, themes, and more - everything you need to sharpen your knowledge of The Contender.

The Contender Summary & Study Guide includes comprehensive information and analysis to help you understand the book. This study guide contains the following sections:

This detailed literature summary also contains Quotes and a Free Quiz on The Contender by Robert Lipsyte.

“The Contender” is a young adult novel by Robert Lipsyte. In the novel, Alfred Brooks is a black 17-year-old high school dropout living in Harlem in the mid-1960s. Alfred is dissatisfied with his job and confused by the changes he sees going on around him, and begins training at Donatelli’s Gym to become a boxer. Although Alfred wants to be a champion, Mr. Donatelli says that first he will need to show that he has what it takes to become a contender. During his second fight Alfred knocks his opponent out, and is unable to get the image of the other fighter crumpling to the ground out of his mind. After his third fight, Mr. Donatelli tells him that he should retire because he doesn’t have the ‘killer instinct,’ but Alfred says he needs to fight one more match. Alfred is beaten badly in his last fight, but refuses to be knocked out and doesn’t give up. With nothing left to prove to himself, Alfred can leave boxing and apply the lessons he has learned to the rest of his life. First published in 1967, “The Contender” is the first in a series of young adult novels about boxing by award winning author and sports journalist Robert Lipsyte. The series is continued in “The Brave.”

One Friday evening 17-year-old Alfred Brooks goes to the local ‘clubroom’ to look for his best friend James. He finds James hanging out there with Major, Sonny, and Hollis – three local hoodlums. Major asks Alfred why he isn’t at his job at Epsteins’ Grocery Store, and Alfred says that the Epsteins close the store early on Fridays because they are Jewish. Major decides they should rob the store and James agrees. James wants Alfred to come with them, but Alfred refuses. After the other boys leave Alfred remembers that a silent alarm was installed in the store the week before and hurries after James to warn him, but he is too late. There are police cars all around the store, and Alfred hears someone say that one boy was arrested. After waiting for James for hours at a cave in the park that only the two of them know about, Alfred heads home. He runs into Major and the others, who tell him that James has been arrested and blame him for not warning them about the alarm. They beat Alfred until he is unconscious and leave him in the street.

When he comes to he is in bed in the apartment where he lives with his Aunt Pearl and her three daughters. Aunt Pearl tells him that Henry – another local boy – and his father found Alfred and carried him home. Alfred feels guilty about James being arrested and thinks that his life is going nowhere. Later that night he decides to take a walk, something he often does when he needs to think. He ends up in front of Donatelli’s Gym, where champion boxers have trained and where Henry, the boy who helped carry him home, has a job. Alfred finds Mr. Donatelli, an older white man, sitting in the gym alone and tells him that he wants to train to be a champion fighter. Donatelli tells him that before he can be a champion Alfred will have to become a contender and says that it is hard work; Alfred will want to give up at least once a day, but if he quits before he really tries it will be worse than if he never started. Alfred says that he wants to try.

Alfred gets up at 5:30 Monday morning and runs through the park (part of the training Donatelli outlined to him) and then returns to the gym after work. The gym is filled with fighters working out, shadowing boxing, and sparring in the ring. Alfred is told that Mr. Donatelli isn’t at the gym because he has a boxer fighting at Madison Square Garden that night. After introducing himself to Bud Martin, Mr. Donatelli’s assistant, Alfred learns that Donatelli has left a ticket to the fight for him with Henry, and the two boys take the subway to the Garden to see the fight. After Mr. Donatelli has the referee stop the match when his fighter, Willie Streeter, is cut over the eye Alfred follows Henry to the dressing room where he meets Spoon, an ex-fighter that Donatelli once managed who is now a school teacher. Spoon explains to Alfred that Streeter “showed some dog,” protecting his eye after it was cut and not attacking his opponent. Along with keeping him from being more seriously hurt Donatelli stopped the fight so that Streeter wouldn’t look like a coward.

Alfred starts training the following day and for the next several weeks he runs in the park every morning and shadowboxes, works on the punching bags, and exercises at the gym after work. Occasionally Mr. Donatelli or Bud Martin stop by and comment on how he’s doing, but usually only Henry pays attention to him, holding the heavy bag while he hits it and timing his workouts. After a while, Alfred begins to resent the fact that Mr. Donatelli won’t let him spar in the ring with other fighters and wonders if there is any point to his training. One Friday evening Major stops by the gym; he tells Alfred that there will be a party at the clubroom that night and that James, who Alfred knows is out on probation but has not spoken to since he was arrested, will be there. Alfred goes to the party and gets drunk. When James finally shows up he hardly acknowledges Alfred, and a few minutes later Alfred sees James buy a bag of heroin. Alfred wants to tell James not to mess with the drug, but is too drunk and passes out before he can say anything. A few days later, feeling depressed and confused, Alfred goes back to the gym to quit. As he is saying goodbye to Mr. Donatelli he realizes that if he quits he will never know how far he could have gone, and decides to continue his training.

Mr. Donatelli finally lets Alfred spar at the gym and soon decides that he is ready to fight for real in the fight clubs. Alfred wins his first fight by unanimous decision. In his second fight, Alfred knocks his opponent out and even though the other fighter isn’t injured, Alfred is upset by the fact that he could hurt, or even kill, someone in the ring. The image of the fighter crumpling to the canvas haunts Alfred. A few days later, after returning from Thanksgiving dinner with some relatives, Alfred sees James huddled in the shadows outside his apartment building; James looks so bad that Alfred hardly recognizes him. He tries to get James to come upstairs for some hot food, but all James wants is money for a fix, and Alfred gives it to him.

During his third fight Alfred fails to throw an easy knockout punch, and Mr. Donatelli says that it is time for him to retire because he doesn’t have the “killer instinct.” Alfred says that he needs to fight one more time to see what he is capable of, and reluctantly Mr. Donatelli lets him fight an older, more experienced boxer. Alfred takes a terrible beating during the first two rounds, but in the third round he trades punches in the middle of the ring with the other fighter and refuses to go down. Even though he loses the fight, Alfred has proven everything he needs to prove to himself and is ready to retire. When he gets home that evening Aunt Pearl tells him that James was injured while trying to rob Epsteins’ again and is running from the police. Alfred finds James hiding in the cave in the park, and after refusing to give him money for another fix talks him into going to the hospital. Alfred has learned that he can do anything he puts his mind to if he gives it all he’s got, and tells James that he will help him beat his addiction and that together the two of them will make something of their lives.

The Contender from BookRags. (c)2022 BookRags, Inc. All rights reserved.