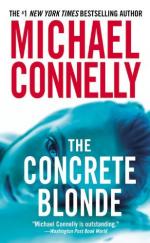 The Concrete Blonde Topics for Discussion

Michael Connelly
This Study Guide consists of approximately 68 pages of chapter summaries, quotes, character analysis, themes, and more - everything you need to sharpen your knowledge of The Concrete Blonde.

Why is Harry Bosch forced to defend his actions in court where the shooting of Norman Church is concerned?

How did this shooting incident affect Harry's career?

What is the correlation between the shooting of Norman Church and the killing of Harry's mother when he was eleven? How could this have impacted Bosch's behavior on the day Church was shot?

What factors play into Harry's realization that there must have been two killers? Which victims could be attributed to the second killer and why?

Who does Harry think is responsible for the second set of victims, and what makes him think he is the one?

Harry's relationship with Sylvia is strained. Why? What is he unable to do?

Who is the leak that is feeding information to Chandler? What does Harry do when he finds out?

What does Dr. Locke want from Harry that...

More summaries and resources for teaching or studying The Concrete Blonde.