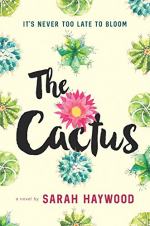 Sarah Haywood
This Study Guide consists of approximately 38 pages of chapter summaries, quotes, character analysis, themes, and more - everything you need to sharpen your knowledge of The Cactus.

The Cactus Summary & Study Guide includes comprehensive information and analysis to help you understand the book. This study guide contains the following sections:

This detailed literature summary also contains Quotes and a Free Quiz on The Cactus by Sarah Haywood.

The following version of this book was used to create this study guide: Haywood, Sarah. The Cactus. Harlequin, 2018. Nook.

The novel is narrated by Susan, a 45-year-old London woman, and is broken up into eight consecutive months, starting with August. Susan was nauseous and unable to sleep because she had just discovered she was pregnant when her brother, Edward, called to tell her that their mother had died. Susan got ready for work and went into the office as if nothing was wrong. Later that night, she called her brother back and instructed him on how to handle planning for the funeral. He informed her that their mother had left a will, which surprised her, because she thought they were just meant to split everything evenly. That weekend, she went down to Birmingham for her mother’s funeral. She was furious when she learned that her mother had left her brother a life-right to the house, which meant that he could live in it for as long as he liked before selling it and splitting the profit with Susan. Susan wanted to sell the house immediately so she could afford to put her child in daycare so that she would not have to leave her job, but her brother seemed resistant to the idea. They attended their mother’s funeral together. Edward got very drunk and the two siblings got into a fight that ended with Susan promising Edward she would not let him have the house.

In September, Susan started planning to bring a case against her brother. She suspected that he had coerced their mother into giving him the advantage in the will, and she wanted to prove it in court. Meanwhile, she had broken things off with her casual partner, Richard, when she discovered that she was pregnant. However, he would not let her leave him without an explanation, so she told him what had happened and he left, shocked. Susan went to collect her mother’s ashes, and then went to the maternity doctor. They asked if she wanted to have tests performed to establish whether or not there were any genetic diseases, and she said she did.

In October, Susan started to become close friends with her upstairs neighbor, Kate, a single mother with two small children. Susan continued to gather evidence by investigating the two witnesses that had signed her mother’s will: her Aunt Sylvia and Edward’s close friend, Rob. Richard contacted Susan and said that he wanted to be involved in their child’s life, but Susan said no. He got angry and threatened to sue her.

In November, Susan went back to Birmingham to clear out her mother’s things so Edward could redo the house. She spent a lot of time with Rob, trying to get dirt on Edward, but did not succeed. Rob offered to let her keep some items at his house as storage, and she agreed. He told her that he had a 20-year-old son that he had never met, and said that it broke his heart. Susan took his story seriously, and decided to give Richard a chance to co-parent with her. Richard took things a step further and asked her to marry him, but Susan declined.

In December, Susan prepared for her first Christmas without her mother by attending Christmas at her Aunt Sylvia’s large estate. Edward and Rob crashed the gathering. Susan and Edward got into a fight about their mother’s ashes. Aunt Sylvia told the two of them to give up their fighting, and suggested that the will was right because their mother had loved Edward more than Susan. Susan was upset, so she went upstairs where she overheard Rob telling Edward to be kinder to her.

In January, Rob called and invited Susan to a New Year’s Eve party. She brought Kate along, and the three of them had a great night. Susan and Rob went back to her place after, and they stayed up all night playing games. The next day, they went out for brunch and to Kew Gardens. A few weeks later, Susan was at home texting Rob when she started to bleed. She rushed to the hospital with Kate, terrified the baby was going to die, but everything turned out fine. Susan met with Richard and they decided that he would take the baby once a week and one weekend per month.

In February, Susan learned that her mother had been keeping a terrible secret. Aunt Sylvia was Susan’s birth mother. She had slept with Susan’s father once and then had convinced her older sister to adopt the child because she was having trouble conceiving. Rob, who did not know about everything Susan had just learned, confessed that he had feelings for Susan, and suggested that they move in together. Susan said no and ran away from him.

In March, the trial Susan had been planning was thrown out because she did not have enough evidence. She was depressed, but she met with Edward one last time. He said that he would vacate the house like she wanted and split the money with her. He wanted to move and travel, and he had only been saying no because she had acted so aggressively toward him ever since hearing about the will. Susan’s water broke and Edward drove her to the hospital. She called Kate and Rob and asked them to come, then told Rob she loved him. The baby was delivered through a cesarean. Susan loved her daughter immediately upon holding her, and through that love was able to forgive all of her parents. She and Rob decided to buy a house together and live as a real family.

More summaries and resources for teaching or studying The Cactus.

The Cactus from BookRags. (c)2022 BookRags, Inc. All rights reserved.