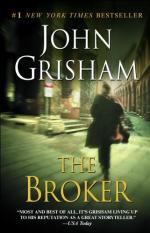 John Grisham
This Study Guide consists of approximately 29 pages of chapter summaries, quotes, character analysis, themes, and more - everything you need to sharpen your knowledge of The Broker.

The CIA places tracking devices in the shoes provided to Backman soon after his release from prison in order to track his movements when he is not with his handlers.

Backman buys himself a computer bag in which he carries his Smartphone and money. Unfortunately, this bag is stolen in an attempt by the CIA to find what Backman is hiding inside it.

Joel Backman has possession of the four computer disks on which is the program called JAM that his Pakistani clients created and wanted to sell.

The Pakistanis discovered nine satellites with highly advance capabilities that they nicknamed Neptune.

Backman requires a passport to travel in Italy, including renting hotel rooms. Backman goes to Francesca about this problem and she gives him her husband's passport.

More summaries and resources for teaching or studying The Broker.

The Broker from BookRags. (c)2022 BookRags, Inc. All rights reserved.