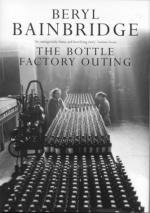 Beryl Bainbridge
This Study Guide consists of approximately 32 pages of chapter summaries, quotes, character analysis, themes, and more - everything you need to sharpen your knowledge of The Bottle Factory Outing.

This detailed literature summary also contains Topics for Discussion and a Free Quiz on The Bottle Factory Outing by Beryl Bainbridge.

The Bottle Factory Outing is a novel about the lives of two women who share an apartment in London and work at a wine factory. Brenda, who left her abusive husband in the country to come live in the city, is a shy woman who is afraid to speak up for herself and gets pushed around by other people. Freda, an outspoken dreamer, is bossy and likes to feel that she has control over her less-fortunate roommate. Freda has planned an outing for all of the employees at the factory.

The outing begins poorly. The van that the workers had hired for the outing is missing and some of the workers are forced to go home. Others pile into two cars to go to the countryside. Freda is in love with Vittorio, the nephew of Mr. Paganotti, the owner of the factory. Vittorio, it turns out, is engaged to be married. He is afraid to tell Freda this and treats her poorly. Brenda just wants to be left alone and doesn't even want to come on the outing. She is constantly harassed by Rossi, the manager at the factory, who is always trying to touch her. The group continues on, experiencing one mishap after another.

The group arrives at a castle, where Freda tries to get closer to Vittorio. Patrick, an Irishman who also works at the factory, interrupts them. He confronts Freda about being mean to Brenda and to him. As the group moves on to have a picnic in the park, they notice that Patrick is missing. Freda thinks she sees a shadow and hears movement in the bushes nearby. Then, after hearing Vittorio and Rossi arguing, Brenda discovers Freda lying dead in the bushes.

There is some confusion as the group tries to figure out who killed Freda - was it Patrick, Vittorio, or Rossi? Patrick thinks he has evidence to implicate Rossi, Vittorio thinks that Patrick is the killer and Rossi is quiet and is withdrawn. They load Freda's dead body into the car and continue on to the African safari that they had planned to visit. They leave the body slumped inside the car as they take a bus tour through the safari. Upon returning to the factory in the evening, the men take Freda's body up to the top floor and leave it among some old furniture. The next day all of the workers, except for Mr. Paganotti, know that Freda is dead. They decide to stuff her body into an empty wine barrel and sent it back to Spain, where it will be discarded. They hold a small, awkward ceremony for Freda on the top floor and then her body is shipped away. Rossi confesses to being responsible for Freda's death. He had been making advances to her in the bushes and she fell backwards as she pushed him away. The next day, Brenda packs up her things and goes back to live with her parents, to try to put this experience behind her.

More summaries and resources for teaching or studying The Bottle Factory Outing.