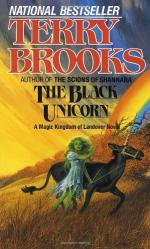 Landover is a fairy world. Landover begins somewhere deep in the forest of the Blue Ridge Mountains, near Waynesboro, Virginia. It is the throne to Landover that Ben Holiday buys to escape the real world after his wife and unborn child die in a car accident.

The Missing Books of Magic

The missing books of magic are secret books that few in Landover know about. The books belonged to Questor's half-brother, who was the former wizard of Landover. At the beginning of the novel, Questor says that his dream revealed to him where the books are hidden. Questor is able to retrieve the books. It is in the books of magic where the spirits and bodies of the white unicorns are hidden and ultimately released.

Chicago is the city where Ben Holiday lived prior to becoming the King of Landover. Ben returns to Chicago to check...