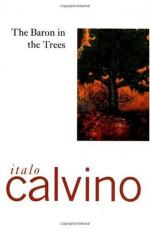 The Baron in the Trees Topics for Discussion

Which do you think was the more powerful motivation never to set foot on the ground: the promise Cosimo made to Viola during their game, or the secret promise he made to himself? Which do you think came first?

What point or points do you think Cosimo was trying to make to the people around him by living his life as he did? What might he have wanted to prove to himself?

Was it hubris, naivete or boredom that made Viola insist that Cosimo suffer and compete for her instead of ever giving herself to him entirely? What, if anything, do you think would have changed in Cosimo's world of priorities and possibilities if she had stayed?

Discuss the incompatibilities Cosimo saw early between himself and his family. How did they resolve, if at all, as they got older and more used to Cosimo's...

The Baron in the Trees from BookRags. (c)2022 BookRags, Inc. All rights reserved.