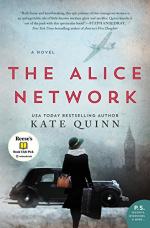 Kate Quinn
This Study Guide consists of approximately 72 pages of chapter summaries, quotes, character analysis, themes, and more - everything you need to sharpen your knowledge of The Alice Network.

This detailed literature summary also contains Quotes and a Free Quiz on The Alice Network by Kate Quinn.

The following version of the novel was used to create this study guide: Quinn, Kate. The Alice Network. William Morrow Publishers, June 6, 2017. Kindle.

The Alice Network by Kate Quinn tells the story of two unlikely friends and their quest for revenge on a brutal man. Evelyn “Eve” Gardiner left her job as a spy in World War I with the intention of killing René, a war profiteer whom she blamed for the death of her best friend. Eve believed she would never get the revenge she desired when she was told René was dead. Decades later, Charlotte “Charlie” St. Clair came to Eve looking for her cousin, Rose, who was also connected with René and who supposedly died during World War II. Realizing that her enemy was still alive, Eve set out to find and kill him. Along the way, Eve and Charlie discovered similarities in their lives and bonded as friends.

Charlie’s mother had brought Charlie from their home in New York to England for an abortion. Charlie manipulated their trip plans so that she could visit Eve, a woman whose address she had found in the search for her cousin, Rose. Charlie believed her cousin was still alive and hoped that Eve could help find her. Eve agreed to help Charlie but had her own ulterior motive. René, the man for whom Rose had worked at one point, was Eve’s enemy. She had made it her life’s goal to hunt René down and kill him.

In World War I, Eve had wanted to take an active role in the fighting but was unable to do so not only because she was a woman, but also because she had a stammer. She was recruited as a spy and began working in René’s restaurant, Le Lethe, in German-occupied Lille. Because Eve was able to speak German, she could eavesdrop on the German officers to whom René catered in his restaurant. Even though Eve had hoped that René would not notice her, he asked her to become his mistress. Eve agreed because she believed she might be fired from her position and lose her job as a spy if she did not.

After Eve and Lili were arrested when trying to get through a German checkpoint on only one safe-conduct pass, René closed his restaurant so he could deal with Eve. He suspected she was a spy and wanted to find out for sure. Throughout the evening, René smashed all of Eve’s knuckles as he questioned her about the woman with whom she had been arrested. The following morning René turned Eve over to the Germans. He claimed that she had told him everything about Lili while she was under the influence of a dose of opium that he gave her. Eve blamed herself for betraying her friend, a betrayal that led to Lili, Eve, and Violette, another spy, being sentenced to jail. Lili died in jail. Eve blamed herself for Lili’s death.

Meanwhile, Charlie learned that her cousin, Rose, had died in a massacre in the village of Oradour-sur-Glane. Eve learned during her research that René had turned Rose in as a member of the resistance, meaning that he was responsible for Rose’s death. Charlie agreed to help Eve search from René, a search that ended in Eve killing René and then turning the gun on herself. Charlie convinced Eve to live by telling her that she had learned that René had lied to Eve. Eve had not given René any information about Lili or the Alice Network, a group of female spies that Lili oversaw. The information instead came from an old cellmate of Lili’s.

More summaries and resources for teaching or studying The Alice Network.