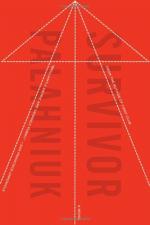 Chuck Palahniuk
This Study Guide consists of approximately 50 pages of chapter summaries, quotes, character analysis, themes, and more - everything you need to sharpen your knowledge of Survivor.

This detailed literature summary also contains Topics for Discussion and a Free Quiz on Survivor by Chuck Palahniuk.

Survivor: A Novel was written by Chuck Palahniuk, the author of the popular book Fight Club. Survivor is the story of Tender Branson, who becomes the last surviving member of what the media calls the Creedish Death Cult. The novel begins with Tender on a plane as he records his life story into the flight recorder of Flight 2039. The entire book is structured like a countdown - the chapters are in descending order and so are the page numbers. Tender is on a race against the clock to tell the reader his story.

As the novel begins, Tender explains that he is a house cleaner. While he thinks his job is okay, he has another job at night that he enjoys much more. Accidentally, a newspaper printed a Suicide Hotline's phone number as Tender's phone number. Every night, Tender gets calls from desperate people who are on the verge of committing suicide. He loves the rush that he gets from talking to these people. He feels as if he can control whether they live or die. One night, a man named Trevor Hollis calls into the hotline. He asks Tender is there is any point of him living. Tender tells Trevor to kill himself.

The next day, Tender goes to the cemetery to find Trevor's grave. There, he meets Fertility Hollis, Trevor's sister. Tender is instantly stricken by Fertility and wants to see her again. Later that night, Fertility calls in Tender's hotline. She tells him about the guy she me at the cemetery. She also tells him that she thinks Tender is disgusting. She only agreed to meet him again next week as she felt so sorry for him. Fertility also reveals that she can see the future. Trevor also had this gift, and it is why he killed himself.

As the novel progresses, Tender explains that ten years ago, his entire family and the Creedish community commit a mass suicide. They do it, because they believe they are delivering themselves to God. Tender does not hear about the Deliverance until 3 months after it happens. After the suicides, he is given a caseworker and joins the Survivor Retention Program. After ten years of treatment, Tender has still not recovered from his issues and is barely coping with the deaths. His problems get even worse when the caseworker informs him that someone has begun killing other survivors and making it look like they committed suicide. This spikes the suicide rate of other survivors, finally leaving Tender to be the last Creedish survivor. Tender is certain that his twin brother, Adam, is the one who is doing the killing and is coming after Tender next.

Once in the hands of the agent, Tender is turned over to a media team. The team physically transforms Tender through a regiment of workouts, steroids and drugs. He becomes a religious superstar, but it is all fake. Nothing of what he says is sincere or truthful as a media team has prepared it. Sadly, as Tender becomes a bigger celebrity, he forgets who he is and sells out his religion as well as his friendship with Fertility.

Tender is told by his agent that he will have to begin making miracles happen. The biggest request the agent has is for a large prediction to be made at the Super Bowl halftime show in New Orleans. Tender begs Fertility for help. When he goes to meet her, his brother Adam also shows up. The two inform him that Adam has set him up for the murder of the caseworker and the upcoming murder of his agent. They then tell him that they have decided to save him.

At the Super Bowl, Tender announces that the Colts will beat the Cardinals, thereby causing complete pandemonium. He, Fertility and Adam escape and begin to make their way to Nebraska, where the old Church colony was located. On the way there, they get in a car accident. Adam is injured in the eye. He asks Tender to deliver him to Heaven, but Tender refuses. Adam then tells Tender to hit him in the face with a rock so that no one can recognize him and send him to prison for the murders. Adam tells Tender to keep hitting him until he dies.

Fertility and Tender then make their way back home, but they are still hiding from the police. Once there, Fertility reveals to Tender that she is pregnant. It is strange, because she was not able to predict that this would happen. She tells Tender that she is going to Australia. She also tells him that her flight will be hijacked and crash and that she needs to be on it. Tender chases Fertility to the airport. He is frantic to make her stop. As the police approach him, he grabs Fertility and drags her onto the plane.

This is what brings Tender to the present. He is finishing up his story. The last engine of the plane has burned out. Now, he must figure out how to get off the plane and start his life all over again.

More summaries and resources for teaching or studying Survivor.