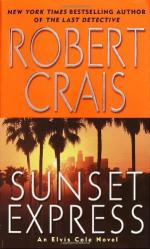 Robert Crais
This Study Guide consists of approximately 32 pages of chapter summaries, quotes, character analysis, themes, and more - everything you need to sharpen your knowledge of Sunset Express.

This detailed literature summary also contains Topics for Discussion and a Free Quiz on Sunset Express: An Elvis Cole Novel by Robert Crais.

Sunset Express is the sixth novel in Robert Crais' Elvis Cole series. In this novel, Elvis is hired to work with the legal team defending Teddy Martin, a famous restaurateur who is accused of killing his wife. As Elvis uncovers evidence that could prove Teddy's innocence, he finds himself becoming a pawn in the defense's game of deception and greed. Sunset Express is a novel about the thin line that separates corruption and ethics.

Elvis is hired by Jonathan Green, famous defense attorney, to investigate rumors that police detective Angela Rossi, who found the murder weapon in Green's current case, has planted evidence in a previous case. As Elvis sets out to begin this investigation, he learns that Lucy, his new love, is coming to town for a visit. Elvis begins his investigation with high spirits and hopes to finish before Lucy arrives so he can devote his time to her.

Elvis interviews LeCedrick Earle, the career criminal who claims Rossi planted counterfeit money on him during his arrest. However, when Elvis interviews Earle's mother, who was also present the day of the arrest, he discovers that she supports Rossi's version of events almost word for word. As Elvis concludes that Rossi is innocent, he walks out of Earle's house to find Rossi and her detective buddies waiting for him. Rossi punches him before he can assure her that he has concluded his investigation in her favor.

Elvis reports to Green the following day and is given a list of names to check out from their tip line, several of which he is able to check out before the end of the day. Elvis picks Lucy and her son, Ben, up from the airport and spends the evening with them. The next day Elvis continues working on the list of names from the tip line while Lucy handles the business she has come to handle. Elvis interviews a man who claims to have talked with a blond man at a bar about kidnapping a rich woman to get money he needs.

Elvis tracks down a man who fits the description given of the blond in the bar. This leads Elvis to a duplex where he finds a map of Teddy Martin's house and pictures of Susan Martin. Elvis calls the police and finds himself turned into a celebrity overnight. The following day Elvis is told his services are not needed, so he takes Lucy and Ben on a tour of Los Angeles. While they are out, Elvis checks his messages and discovers that Green's office wants him to do an interview on television. Elvis agrees, but the aftermath is so intrusive that he decides not to do anymore.

Sometime later, Elvis sees a press conference in which Mrs. Earle has retracted her statement and now claims that Rossi set up her son. Elvis tries to talk to Green about this, but meets with resistance. Elvis quits the Big Green Defense Machine. The following day, Elvis visits Rossi and promises to help prove her innocent. Together, Elvis and his partner, Joe Pike, begin re-investigating the leads Elvis has discovered for Green, beginning with James Lester, the tipster who led Elvis to the evidence against the possible kidnappers. However, when Joe and Elvis arrive at Lester's house, he is dead.

Elvis goes to Mrs. Earle's house, but she is not home. Elvis waits, eventually speaking with Mrs. Earle's neighbor. Elvis learns that Green's head of security has attempted to find Mrs. Earle as well. Elvis takes all the information he has now to Rossi, her partners, and the assistant district attorney. Unfortunately, there is not enough information to prove anything yet. However, the ADA gives Elvis the name of a lawyer who once worked for Green until he was busted for drugs. Elvis, Joe, and friend go to the lawyer's house and force him to help them break into Green's office and get a copy of his contracts with Martin.

Elvis and Joe return to Mrs. Earle's house in hopes of finding out why she has changed her story. When Mrs. Earle is still not home, Elvis and Joe break inside, hoping to find a airplane ticket charge or other evidence of her whereabouts. When Elvis discovers that Mrs. Earle has recently spoken to her son, he decides to go see LeCedrick to find out if he knows where his mother might be. LeCedrick admits to working a scheme with one of Green's lawyers to convince his mother to change her story. LeCedrick also tells them where Mrs. Earle has gone, but says he told Green's security man a few hours before.

Elvis, Joe, and Rossi rush to the home of Mrs. Earle's beau, but discover that Green's security people have already gotten to her. Elvis, Joe, and Rossi follow them to a deserted shed beneath a radio tower where they believe Mrs. Earle is about to be murdered. They sneak into the shed and a gun battle erupts. At the end, one of Green's lawyers admits that Green is dirty and he ordered the deaths of Mrs. Earle and her friend, as well as Lester. Elvis takes this information to the ADA who immediately has a warrant issued for Green's arrest. Unfortunately, Green is too smart to make himself vulnerable to prosecution. Elvis takes matters in his own hands by beginning a media campaign against Green.