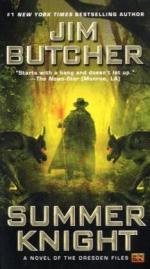 This detailed literature summary also contains Topics for Discussion and a Free Quiz on Summer Knight by Jim Butcher.

Summer Knight, by Jim Butcher, is a fanciful tale of wizards and faeries, taking place in modern Chicago. Harry Dresden is a wizard, entrenched in his own misery due to a situation involving his former girlfriend, Susan Rodriguez. Several months earlier Susan had been infected by the Red Court, or local vampires. Susan left Chicago asking Harry not to follow and he had respected her request, though he has spent the majority of his time in his basement laboratory trying to find a way to save the one he loves. In the process, Harry has distanced himself from everyday life, avoiding friends, socializing, and personal hygiene.

A meeting with Billy the werewolf changes everything. Billy asks Harry to meet him to discuss magical changes that are going on in the city. Harry does, and while they are at the park there is an attempt on Harry's life. Though he is not sure exactly who is responsible, Harry believes it might be the Red Court, who have declared war on him for his actions during the issues with Susan. Also while at the park, Billy informs Harry that he has an appointment with a client that afternoon. Though Harry is at first angry, he realizes that he does need to earn a living, and decides to keep the meeting that Billy has arranged. This meeting will change Harry forever.

Mab, the Winter Queen, requests that Harry solve the mystery of who killed the Summer Knight, Ronald Reuel. The Summer Knight's power is missing and the Winter Court is suspected in the murder and theft. Harry is not interested in working for a faerie, but discovers that his godmother, Lea, has more or less sold him to Mab. Harry tells the faerie queen his will consider her offer, though the queen has more or less guaranteed that he will not have a choice.

The White Council, or the governing body of wizards, is also in town. The Council is concerned about the war that the Red Court has started, directly related to the actions of Harry several months ago. The Senior Council votes that Harry must prove his worth as a true wizard in order to avoid being handed over to the vampires. Coincidentally, The Winter Court has told the wizards that they may pass through thier lands if a request is granted. Harry realizes too late that the request is the one Mab has made of him, and that in order to save his own life and those of many others, he must find the murderer and the Summer Knight's power.

Harry's quest takes him through many trials, battling trolls, ogres and ghouls, as well as reuniting him with his first love, Elaine. The two had been separated in their teens when Elaine had helped Harry's old mentor try and turn him to dark magic. Elaine returns, explaining to Harry that she had been under a spell at the time, and would never have hurt him. Elaine is now working for the Summer Lady, Aurora, trying to find who killed Ronald Reuel and restore his power. Harry realizes that things are getting more complicated by the minute and he is forced to turn to his friend, Karrin Murphy, a Chicago police officer and head of the Special Investigation Department. Karrin helps Harry, and he helps her in return, as she has also been shutting herself off from life due to problems in the past.

The battle between good and evil escalates as the Summer Solstice approaches. Harry must find the missing power of the Summer Knight before the natural order of Summer and Winter in Nevernever are forever altered, changing life for all living things for all time. Though the natural assumption is that Winter is behind the murder and theft of power, Harry begins to realize that there are other motives behind the budding war. After meeting with Maeve, the Winter Lady, and Aurora, the Summer Lady, Harry also meets with the Summer and Winter Mothers. Small truths about each help Harry piece together the course of action that has led to the brink of war.

Aurora, the seemingly kind Summer Lady, acting in concert with members of her Court and the traitorous Knight of the Winter Court, is responsible for the death of Ronald Reuel. Hiding the magic of the knight in the changeling Lily, Aurora turns the girl to stone in order to keep the magic hidden until the Summer Solstice. Aurora is mad, tired of the constant change of power between Summer and Winter, and has orchestrated a war so that the power struggle will be ended.

Harry is able to defeat the evil Summer Lady with the help of his friends, the werewolves, Lily's changeling friends, and the Winter Lady. Aurora is dead and Lily becomes the new Summer Lady. The position of Winter Knight is offered to Harry but he refuses it, unwilling to deal with the Winter Queen unless necessary. Dresden's life is saved as he is able to fulfill the task the Winter Queen had required, which also fulfilled the test that the White Council had laid before him.

In the process, Harry realizes that his friends are truly his friends, and that though he misses Susan, and feels responsible for her dealings with the vampires, he needs to move on with life. Harry will continue to help Susan and fight evil and defeat the vampires, but he will live his own life while he is doing so.