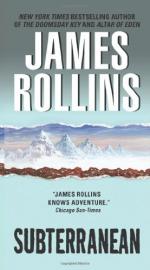 Explain Ashley's personality. Which of her traits seem to be directly connected to her failed marriage? Explain.

Pick two pieces of foreshadowing found in the book. Explain what it is that these two moments point to in the story.

List who you think are the top five characters in the book. Which of these characters are antagonists? Which are protagonists? Explain your answer for each.

Explain what the main plot in the story is. Why did you pick this plot. What other subplots play into the main plot? (pick a minimum of three subplots).

Speculate on the reasons that Khalid wanted to keep Linda alive rather than kill her. Would Khalid have let Linda live if he had been able to get out of the cave? Explain why or why not.

Describe the balance that the mimi'swee have with their environment. How does this...