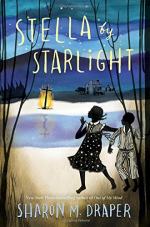 Related Topics
Blended
Out of My Heart

Sharon M. Draper
This Study Guide consists of approximately 48 pages of chapter summaries, quotes, character analysis, themes, and more - everything you need to sharpen your knowledge of Stella by Starlight.

This detailed literature summary also contains Quotes and a Free Quiz on Stella by Starlight by Sharon M. Draper.

Stella by Starlight is a historical novel written by Sharon M. Draper. The story's narrator only has access to the thoughts and feelings of the novel’s protagonist, Stella Mills. The novel takes place in the year 1932 in the small town of Bumblebee, North Carolina.

In the opening scene of the novel, 11-year-old Stella Mills and her eight-year-old brother Jojo are out by Kilkenny Pond when they witness a meeting of the Klu Klux Klan taking place. The group of men clad in white burn a cross. The children return home and tell their parents what they have seen, and they are shocked as the Klan has not been active for many years. The family holds a meeting for other black adults from the neighborhood. Stella and her classmate Tony sit outside and talk. Stella tells her friend that she comes outside sometimes at night to write.

The next day, the Mills children walk to school. As they are gradually joined by their friends, parents offer warnings and tell the children to remain in groups. The children stop by Cathy’s Candy Store on the way to school and have a tense meeting with a group of white children. At school, the teacher Mrs. Grayson attempts to distract the students by preparing for the Christmas pageant, which is still weeks away. Afterward, they begin working on writing projects, which Stella loathes. The narrator reveals that Stella has struggled to read and write her entire life. Mrs. Grayson, however, believes that Stella has great potential.

One Saturday, a traveling salesman and storyteller called Spoon Man visits the town. Mama organizes a feast for the neighborhood, and everyone brings food and shares stories. Spoon Man says that news about the Klan activity has spread around the state. He attributes the uprising to the effects of the Great Depression. Spoon Man tells a dramatic tale about an eagle who was born among chickens and therefore believed he could never fly. That night, Stella goes outside to write, and Mama joins her on the porch. She tells Stella that she has known about her late-night writing sessions the whole time, and that despite her poor performance in school, Mrs. Grayson thinks Stella is the best thinker in the class.

The next day in church, Pastor Patton gives a sermon saying he plans on registering to vote for the upcoming election and encourages the congregation to join him. People are shocked and nervous at the idea. Eventually, Pastor Patton, Mr. Spencer, and Papa go into Spindale to register. Stella joins them to observe. In Spindale, the men are greeted with extreme hostility and made to take a complicated test in addition to paying a heavy poll tax. All three men pass the test and are registered.

Soon, Mrs. Grayson announces an essay contest sponsored by the Carolina Times newspaper. She asks all students to submit a story, and Stella is incredibly nervous. Tony encourages Stella to write about the Klan. She writes a powerful essay comparing the Klan to dragons.

One afternoon, after doing chores and looking at the Sears and Roebuck catalog with her friend Carolyn, Stella sees that the Spencer home is on fire. As Stella rushes to help, she is stopped by Klan members who are riding away from the blaze. They tell her the fire is payback for the men registering to vote. Stella, unharmed, hurries to help. The white and black communities join together in an effort to douse the flames. When Mrs. Spencer announces she can’t find her daughter Hazel, Stella rushes into the woods and finds Hazel in a secret hiding spot.

Then next day in church, Pastor Patton makes an example of Stella and directly praises her bravery. Stella is embarrassed, but her parents are incredibly proud. Donations begin to stockpile for the Spencer family, and one day Mrs. Spencer arrives to gift Stella an extra pair of shoes, some new dresses, and a typewriter. Stella is thrilled about the typewriter and begins using it to writer her stories.

At school, Mrs. Grayson announces her selections for the essay contest, and Stella is not chosen. She feels incredibly sad that her work has not been selected.

On election day, a large group marches with the three men who registered to vote so that they may cast their ballots. Stella decides to start her own personal newspaper, “Stella’s Star Sentinel” to document the day and beyond.

Not long after election day, Jojo becomes ill and Stella is sent into town to retrieve medicine for him. She walks with Tony into town, and after they run their respective errands, Tony is attacked by two adult white men. Though he is ultimately safe and relatively uninjured, Stella is stunned by the attack. In an edition of her newspaper, Stella notes how the attack has left Tony a quieter and more reserved person.

In school, Mrs. Grayson announces that Helen Spencer is the winner of the essay contest. Though Stella knew her essay wasn’t even entered, she still feels very sad. Jojo points out that perhaps her writing about the Klan was too dangerous for publication, which makes Stella feel slightly better. Back at home, the two can’t find Mama. They search for her and find her in the woods, having been bitten by a snake. Jojo runs to get the doctor while Stella treats her wounds as best as she can. Jojo returns with Papa, who says that Dr. Hawkins is out of town. Stella does to Dr. Packard in an attempt to get help, but he angrily tells Stella he only treats white patients.

Stella returns home to find neighborhood women tending to Mama. Soon, Mrs. Odom arrives with Dr. Hawkins in tow. She drove to Raleigh and back in one night so that he could get the antivenom to Mama in time. Mama lives and begins to recover. However, her leg and walk may be permanently damaged due to the bite.

One night, Stella is out walking alone near the pond. She hears something splash into the pond followed by screams for help. Without thinking, Stella dives in and rescues the person from drowning. On shore, she sees it is Paulette Packard she has saved. Paulette explains that she hoped to make herself sick so her neglectful father would pay attention to her. She explains that Dr. Packard is cruel and regularly beats both her and her mother. Stella can’t help her anger and takes it out on Paulette, blaming him for her mother’s near-death and the chaos and suffering the Klan has caused. Stella doesn’t expect Paulette’s sad and understanding reaction.

Soon, Christmastime comes to Bumblebee and everyone is happy and relaxed. There is no sense of paranoia as everyone comes together in celebration at home and at the school Christmas pageant. Mama is recovering well, and Papa is working hard to earn extra money. The novel concludes with one of Stella’s essays in which she assures the reader that she plans on doing great things and looking beyond the confines of her small town and the small-minded people who live within it. Ultimately, the novel concludes with a message of hope for the bright future ahead.

More summaries and resources for teaching or studying Stella by Starlight.