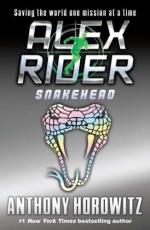 "Snakehead" is the seventh book in the Alex Rider series. Since Alex is fourteen years old, the youngest secret service operative to have served Britain, the United States and Australia, the book lands into the young adult genre. The story follows a heroic novel plotline.

Alex falls to earth in a space capsule and is picked up by a military vessel near Australia. The Australian secret services enlist his help in a mission, and because his godfather, Ash, will be his partner, Alex accepts after a period of reluctance. The mission involves Ash posing as a refugee from Afghanistan and Alex playing his son. The first part of their mission takes place in Bangkok, Thailand. They take a sleazy room in Bangkok's Chinatown, one of the most impoverished places on earth, and wait to be contacted by the snakehead (no capitalization). The snakehead is an organization of criminals known for its ruthlessness. The snakehead people arrive and accept a large sum of money in exchange for falsified identification to be used in Australia, where Ash and Alex are supposedly seeking asylum. The objective of their mission is to determine where the false identification is created.

Nothing goes smoothly for Alex from this point on until the climax in the second-to-last chapter. Instead of delivering the identification documents, the snakehead people want Alex to pick them up himself, and alone. He makes the rendezvous only to be taken to an illegal martial arts fight in an old warehouse located on an island in a polluted river. Alex fights but nearly loses until he cheats by spitting water into his opponent's face. Alex wins the fight, but because he should not have done that, the spectators and his captors start rioting. Having nowhere else to go, he drops into the river, hijacks a ferry boat and makes his escape.

The next leg of the mission takes place in Jakarta, Indonesia. Alex and Ash are taken to a toy warehouse where a raid by the Indonesian special forces takes place shortly after. During the pandemonium, Alex and Ash jump inside a van that brings them to the loading docks. There Alex is forced into a shipping container with other refugees and is separated from Ash. The container is loaded onto a ship, and he begins his journey to Australia. About a day later, Alex blows the door to the container using spy devices that the British had provided him and discovers the powerful bomb, Royal Blue, on board. Through his cleverness and quick reactions, Alex succeeds in escaping the ship but is later captured by Major Winston Yu, Alex's main antagonist.

Yu sends Alex to a hospital located deep within the Australian wilderness. The hospital exists to harvest organs from Major Yu's enemies and sell them on the black market. Alex soon realizes he must escape when a customer for his eyes arrives. Again through cleverness and quick wits, Alex manages to escape the hospital, burn it down on his way out, and nearly loses his life on a river with rapids and a deadly waterfall. Rescued by his friends in the special forces, Alex accompanies them on the mission to stop Major Yu's plan to create a tsunami that will kill eight targeted people and thousands more that, to Yu does not matter. The mission is successful, Alex detonates the bomb, the shock wave kills Yu but does not cause a tsunami, and Alex triumphantly returns home.