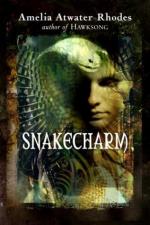 Amelia Atwater-Rhodes
This Study Guide consists of approximately 25 pages of chapter summaries, quotes, character analysis, themes, and more - everything you need to sharpen your knowledge of Snakecharm.

Snakecharm is the second novel in The Kiesha'ra series by author Amelia Atwater-Rhodes. In this novel, Zane Cobriana is the leader, the Diente, of the serpiente and avian people that are now living in peacetime. Part of the peace came when he took on his pair bond, Danica, an avian, as his queen and wife. When the couple find out that Danica is carrying their first child, their thought processes start to change. While they have always striven for peace between their once warring people, they hunger for it even more now that they are about to be parents.

As the novel unfolds, the two try to decide how they are going to raise their mixed-blood child. Because each society has different rituals, customs and cultures when it comes to raising children, Zane and Danica are struggling with what is right not only for their child but also for their people as a whole. In the meantime, Safka, one of the original avian people, is in serpiente territory looking for a falcon criminal.

While the hunt for the falcon criminal is ongoing, Zane and Danica learn the true identities of two of the Royal Flight guards who are closest to Danica and Zane—Rei and Erica. Rei turns out to be the heir of the avian throne on the island, but his mother and the empress set him free from his duties and return him to serpiente land. In the end, preparations start to build a new united society, where the serpiente and avian can live side-by-side and as one.

More summaries and resources for teaching or studying Snakecharm.