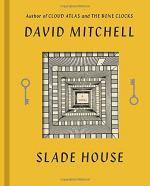 David Mitchell
This Study Guide consists of approximately 53 pages of chapter summaries, quotes, character analysis, themes, and more - everything you need to sharpen your knowledge of Slade House.

Norah and Jonah Grayer are twins who were born into a working class family. When their parents died, they were taken in by a wealthy land owner. While many twins develop their own language, Norah and Jonah developed the ability to communicate telepathically. When their ability was discovered, the twins were put under the care of a renowned mystic who helped them hone their abilities.

The story opens in 1979. Nathan Bishop, a young teenager, visits Slade House with his mother, Rita. They believe they are there to attend a music soiree. Nathan is a socially awkward youth and he begins to see that there's something wrong with the situation, but he can't be sure how to interpret the information. He goes through a chaotic period of time and dies in the attic of Slade House. In his final moments of physical life, Nathan watches his soul leave his body and hover above his head. Norah and Jonah suck up Nathan's soul, which feeds their immortality.

Each soul feeds their immortality for nine years. Nine years later, Fred Pink wakes from a coma and sees a news article about Nathan's disappearance. He reports to police that he saw Nathan and Rita in Slade Alley just before they vanished. Inspector Gordon arrives in Slade Alley to follow up on the report. There, he finds a woman he believes to be a helpless young widow. He falls under her spell and doesn't realize what's happening until it's too late to escape. Just before Gordon dies, Nathan manages to pass along a message. He's found a weapon, but doesn't say what that weapon is.

Nine years later, Fred Pink tells his nephew about the “Slade Alley Vanishings.” His nephew is a member of the Paranormal Society at a local college. Sally Timms is also a member of that group. She's also an empath. Just before she dies, Gordon appears to her, holding a hair pin that was worn by Rita Bishop. Sally isn't able to escape, but she does find the weapon. Nine years later, Sally's sister Freya is looking into Sally's disappearance. Like the others, Freya doesn't know what's happening until it's too late. She dies, but Sally intervenes before Jonah and Norah can consume Freya's soul. Sally sticks the hat pin through Jonah's neck and Freya's soul escapes.

Jonah spends the next nine years inside Slade House, growing steadily weaker as he waits for the next opportunity to take the soul of an empath. Norah has found a young psychiatrist named Iris Marinus-Fenby, who says she likes to be called Marinus. Marinus is actually a member of the Horologists, an ancient group that fights evil. She knows all about Jonah and Norah, and she's there to stop them.

Marinus reveals her true identity, which makes Jonah furious. Norah continues to try to figure out a way to subdue Marinus but Jonah strikes out. He expects Norah to help him kill Marinus, but Norah doesn't. Marinus reflects the attack and kills Jonah. Marinus then sets off a bomb which creates a crack in Slade House. Without Jonah's help, Norah is unable to maintain the illusion, and the house dissolves. Marinus leaves Slade Alley as Norah soars above the neighborhood. She is intent on revenge but knows she can't possibly do anything in her weakened state. She sees a young pregnant woman and Norah enters the body of the unborn baby boy, where she settles in to wait.

More summaries and resources for teaching or studying Slade House.