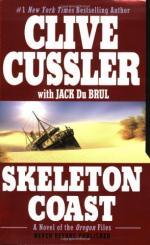 Clive Cussler
This Study Guide consists of approximately 49 pages of chapter summaries, quotes, character analysis, themes, and more - everything you need to sharpen your knowledge of Skeleton Coast.

Skeleton Coast by Clive Cussler is an adventure that combines treasure hunting, ecological fanaticism, kidnapping, terrorism and high tech rescues. Sloane Macintyre is an employee of DeBeer's, and on a mission to recover millions of dollars worth of diamonds from the Rove - a ship that sank off the Skeleton Coast in 1896. The diamonds were the property of the Herero king and stolen by H.A. Ryder and his friends. They journey across the Kalahari desert to rendezvous with the Rove and make their escape, but while waiting for them, the Rove is the victim of an outgoing tide. Stuck, they can do nothing but wait for high tide. Before they can leave, Herero warriors arrive to reclaim their king's property. While they battle, a storm rages outside and the results sink the ship with all aboard.

In her efforts to find the Rove, Sloane interviews local fisherman looking for the areas where they have lost or snagged gear. From there, using equipment to detect the ship, she hunts but to no avail. She does however attract the attention of a group of men who would rather she not spend so much time in the waters around Walvis Bay She is threatened and the next day chased across the ocean in a boat called the Pinguin. Luckily for Sloane, a seemingly dilapidated freighter is in the area, and comes to her aid. Rescued, Sloane is confused by what she sees. The freighter, Oregon, is not what it seems, and Sloane asks her Captain Juan Cabrillo for answers. Amused and surprised, as she is the first to notice his subterfuge, he agrees to tell her all at a later date. The Oregon only looks old and run down. In reality, she is a state of the art vessel with every possible technological advantage at her disposal from power to weaponry. Former CIA employee, Juan formed the Corporation and built the Oregon to deal with situations that governments cannot afford to become directly involved in. On a mission to deliver weapons that were bugged for tracking to Congolese rebels, Juan hears about the kidnapping of Geoffrey Merrick. The appearance of Sloane connects the dots between her mission to find the Rove, and his mission to rescue Merrick. With ties that all seem to lead to Dan Singer, the Oregon and her crew go from one battle to another, trying to undo the damage and upheaval Singer leaves in his wake.

Susan Dunleavy is a scientist who's creation could cause one of the most terrible hurricanes of our time. With roots that include a childhood filled with visions of oil spills and the resulting ecological and economical fallout, she is ripe for manipulation to Dan Singer's cause. Singer believes the world will never learn. He sees the only way to a better future is to cause an ecological disaster as a demonstration that he hopes will wake the general population up. Kidnapping his former partner and holding him hostage, Singer wants Merrick to see first hand what he has planned. Enlisting a rebel faction from the Congo under the leadership of Makambo, Singer has them launch a coordinated attack on several ocean based oil rigs, instructing them to take over and pump the crude into the ocean. Singer, meanwhile, has another agenda. He is using Susan's discovery to seed a hurricane, increasing its strength many fold. In an exciting conclusion, the Oregon and her crew sink the freighter Singer is using and stops the storm from completely forming. As a promise to both Sloane and Moses Ndebele who lent his aid and manpower to regain control of the oil rigs, Juan uses his connections to find the Rove and recover the diamonds aboard. Its location and the fate of its passengers are a surprise to all.

More summaries and resources for teaching or studying Skeleton Coast.