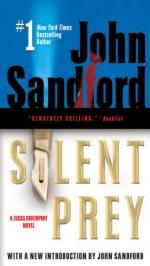 Silent Prey follows the escape of Dr. Michael Bekker, a psychopath on trial for multiple first-degree murders, and Lucas Davenport, the retired cop who caught him the first time. Bekker escapes the courthouse where his trial is being held and disappears into the underbelly of New York City. Lucas Davenport is called in by his old flame, New Yorker Lily Rothenburg, to take pressure off the NYPD Bekker case and also to track down a rogue police force, nicknamed the Robin Hoods. Robin Hood is suspected of taking justice into his own hands and killing off criminals that slip through the justice system, but the rogue group has killed off a fellow cop, Walter Perry, who was hot on their trail. Bekker holes up in SoHo as an old lady's caretaker, and gets his drugs illegally from Whitechurch, a dealer at Bellevue hospital. He is searching for the moment between life and death where a person's essence leaves their body, and he hopes to capture the moment on film. He becomes more and more dependent upon the drugs, and narrowly escapes capture by the police.

Meanwhile, Davenport has been sent back to Minneapolis to interview Bekker's cellmates and also to secretly follow a lead for the Robin Hood case in Charleston. After interviewing Burrell Thomas, he realizes that Bekker is masquerading as a woman, and that is how he is able to get so close to his victims. After Charleston, he is able to narrow down the Robin Hood suspects to two: Kennett and O'Dell. After the announcement that Bekker is dressing as a woman, Bekker shaves his head and his persona as Beauty is gone. Davenport and Fell track him down to the Lacey building, and Fell shoots him just as he is about to shoot Davenport. Davenport must wrap up business with Fell and O'Dell about the case, and he is seen off to his plane by Lily. They still take comfort in one another after all they have been through, and Davenport realizes there is no fantasy land where he can escape from all his responsibilities. He has effectively solved both of his cases and may go home to Minneapolis, hopefully more at peace.