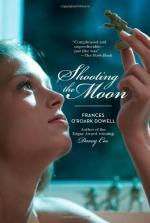 Frances O'Roark Dowell
This Study Guide consists of approximately 17 pages of chapter summaries, quotes, character analysis, themes, and more - everything you need to sharpen your knowledge of Shooting the Moon.

Shooting the Moon is a novel by Edgar Award-winning author Frances O'Roark Dowell. The story follows the main character, Jamie Dexter, as she transitions from a 12-year-old girl to a teenager while her older brother enlists in the Army and heads off to Vietnam. When Jamie is moping around the house over the summer because her two best friends have moved away with their families, she gets a job at rec center on post. While working at the rec center, she mingles with GIs that have been to Vietnam, or who are waiting to go. She befriends Private Hollister, one of the soldiers assigned to run the rec center. The 19-year-old soldier and the 12-year-old girl strike up a friendship that includes a summer-long championship game of gin rummy.

When Jamie's older brother, TJ, enlists in the Army and heads off the Vietnam instead of heading off to college, their Colonel father is beside himself. TJ serves as a medic while in Vietnam and uses his hobby of photography to show Jamie what it is like for him to be at war. TJ starts sending Jamie rolls of undeveloped film and asks her to send him the contact sheets, which are the sheets that show a thumbnail of each photograph on the film. Jamie takes this as a sign that TJ wants her to learn how to develop film. She enlists the help of a soldier that frequents the rec center, Sgt. Byrd, to teach her. Jamie seems to be a natural at developing film and soon becomes the resident expert, teaching other soldiers how to develop their film.

One of TJs favorite subjects to shoot is the moon. After just a few rolls of film, there are dozens of pictures of the moon from TJs point-of-view in Vietnam. When TJ goes missing in action (MIA), Jamie turns to his photos of the moon to search for clues. For the two years that TJ is MIA, it turns out he is a prisoner of war (POW), Jamie starts shooting her own pictures of the moon. When TJ returns home, Jamie shows him the pictures to show him everything that he missed while he was gone.

More summaries and resources for teaching or studying Shooting the Moon.