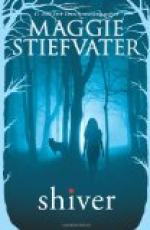 Maggie Stiefvater
This Study Guide consists of approximately 35 pages of chapter summaries, quotes, character analysis, themes, and more - everything you need to sharpen your knowledge of Shiver.

This detailed literature summary also contains Topics for Discussion and a Free Quiz on Shiver by Maggie Stiefvater.

Grace Brisbane is about eleven when she's pulled from her tire swing by a pack of wolves, taken into the woods and mauled. Sam, a wolf himself, initially watches but eventually intervenes. Grace holds a special fondness for the wolves after that and looks forward to the winter months when she knows "her wolf" can often be seen hovering near her home. Sam, who turns back into a boy in the heat of the summer months, sometimes sees Grace but never works up the courage to speak to her. Grace doesn't realize the wolves are werewolves until after the death of a classmate, Jack Culpepper.

Soon after Jack is mauled and apparently killed by wolves, several men gather to kill off the wolf pack. Grace attempts to stop them, saying that she has a friend in the woods taking photographs that day. She arrives at home to find Sam, in human form, collapsed on her door with a bullet wound to the neck. Grace takes him to the hospital and he is healed within minutes of being stitched up. They leave the hospital without waiting for a release because Sam knows he won't be able to explain the quick healing. Grace accepts him for what he is and recognizes him as the wolf that saved her.

Sam is dealing with the scars of his childhood. Beck, another werewolf, had changed him when Sam was very young. Sam's parents, seeing him change, were horrified and believed he was possessed by a demon. They slashed his wrists in an effort to save him. Beck is the leader of the pack while the werewolves are in human form. He takes Sam in, teaching him academics during the summer months when they are human. Beck had been a lawyer in his previous life and he owns the house the pack uses during the summer. Beck knows he'll soon change for the final time and fears for the future of the pack. In an effort to keep them safe, he changes several others. He hopes the younger members will become responsible for those who are not changing as early or as often. Same hates that Beck has changed more humans and sees only the cruelty of it.

Grace's parents are seldom home and never pay attention to her when they are, making it easy for Sam to spend time in her house. They are soon deeply in love. Meanwhile, Jack has begun to change form erratically and learns that Grace was also bitten but never turned. He believes she has a cure. In an effort to force her to share the cure, he bites her good friend, Olivia. Jack's sister Isabel soon learns the truth about the werewolves. With the information that Grace ran a very high fever soon after being bitten, Isabel, Grace, Sam and Jack come up with an idea to infect Jack, Sam and Olivia with meningitis in order to produce a high fever. Jack and Sam take the chance on the cure. Olivia decides that she'd rather be a wolf. Jack takes the shot and quickly dies. Sam is turned immediately after the shot and eventually returns in human form.

More summaries and resources for teaching or studying Shiver.

Shiver from Gale. ©2005-2006 Thomson Gale, a part of the Thomson Corporation. All rights reserved.