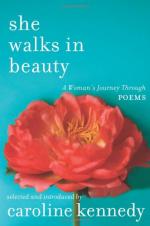 +Chapters Summary and Analysis
Falling in Love
Making Love
Breaking Up
Marriage
Love Itself
Work
Beauty, Clothes and Things of This World
Motherhood
Silence and Solitude
Growing Up and Growing Old
Death and Grief
Friendship
How to Live
Free Quiz
Characters
Objects/Places
Themes
Style
Quotes
Topics for Discussion
Order our She Walks in Beauty: A Woman's Journey Through Poems Study Guide

She Walks in Beauty: A Woman's Journey Through Poems Characters

Caroline Kennedy
This Study Guide consists of approximately 45 pages of chapter summaries, quotes, character analysis, themes, and more - everything you need to sharpen your knowledge of She Walks in Beauty.

She Walks in Beauty: A Woman's Journey Through Poems Summary & Study Guide Description

She Walks in Beauty: A Woman's Journey Through Poems Summary & Study Guide includes comprehensive information and analysis to help you understand the book. This study guide contains the following sections:

This detailed literature summary also contains Topics for Discussion and a Free Quiz on She Walks in Beauty: A Woman's Journey Through Poems by Caroline Kennedy.

Cupidappears in Falling in Love

Although not mentioned by name, the arrows of Cupid play a large part in these poems. If cupidity is thought of as not just sexual passion but other forms of attachment for friends, children and animals, the scope of love becomes apparent. There is not only love of others but love of self, love of possessions and love of ideas or beliefs. Inevitably, poems for women involve every sort of love and attachment demonstrating that one can fall in love with someone of either sex, with one's own child, with music and with ideas. "Falling" in this context implies a loss of control, a surge of emotion that is intoxicating.

Closely allied to cupidity is sexual passion which can be experienced in a variety of ways. "Making love" is the common euphemism for sex, as expressed in this clutch of poems from the medieval to modern. The very permeable membrane that separates love and sex can be easily crossed, as Wendy Cope says in "Summer Villanelle" (Making Love, p. 24): "But is it love? And is it true?/Who cares? This much I can't deny:/You know exactly what to do." Sex as passion, sex as surrender, sex as procreation, sex as silent when a young child sleeps nearby—these are all aspects of Eros that clearly suffuse everyone's lives.

Everyone has a mother and therefore everyone has a huge stake in motherhood. It has been observed that music closely attuned to the pace of the mother's heartbeat is more soothing and calming than music in another tempo. Motherhood is a life-changing event for both newborn and mother, and their bond continues to grow stronger, sometimes, than either consciously realizes. Sharon Olds, in "High School Senior," looks at her 17-year-old daughter and remembers that at the time of her birth she could not imagine life with her. Now she can't imagine life without her: "My daughter is free and she is in me—no, my love of, kissing her is in me, moving in my heart." Sometimes motherhood can be a thankless task, as reflected in Mary Morrison's "Nobody Knows But Mother." Some of these include sewing button, soothing bumps and bruises, darning stockings, fixing meals, kissing heads and more.

Loneliness is the vulnerability of all who love, and none can experience its bitter sting more profoundly than women. Probably because nature has

equipped women to be the nurturers and healers of our race, deprived of the opportunity to exercise those God-given instincts women may sometimes

try to fill the pit of loneliness with pets, shopping or even reckless love affairs. Of course, women are not the only ones who suffer loneliness as most men will attest. But for relationship-focused women, loneliness can be particularly trying. "'Tis better to have loved and lost/Than never to have loved at all," advises Alfred, Lord Tennyson in "In Memoriam A.H.H." This may be cold comfort for anyone who has lost a love, male or female, for whatever reason. But some women, such as Emily Bronte, seem to enjoy being alone: "I'm happiest when most away," as she says in the first line of her poem of the same name.

The women's movement probably has affected no other institution in society as much as the role of wife. "Value your selves and men despise/You must be proud, if you'll be wise," Lady Mary Chudleigh advises women in "To the Ladies." She tells women there is no difference between a wife and servant, and advises them to "shun! oh shun that wretched state" of marriage. The biblical perspective of a wife is simply a reflection of the patriarchal nature of ancient Jewish society where a wife was esteemed as a valuable possession much like livestock. In this view a wife is expected not only to bear children but to work at physical and other forms of labor until she drops from exhaustion. In "From a Survivor" by Adrienne Rich, a wife who has devoted her entire life to her deceased husband reflects on his body when they first came together: "It is no longer the body of a god or anything with power over my life."

In a love relationship, acceptance of one's self and one's partner serves as a foundation for acceptance of love as an ongoing reality, Without that acceptance, it is questionable whether real love exists as in "Jamesian" by Thom Gunn: "Their relationship consisted/In discussing if it existed." And the acceptance that comes with love is something elemental, as described in "The Saller Orchid" by Amy Clampitt: "Love is a climate small things find safe to grow in." Perhaps the most eloquent description of the acceptance that love provides is in Corinthians 13:1-13: "Love is patient, love is kind. It is not rude, it is not self-seeking, it is not easily angered, it keeps no record of wrongs. Love never fails."

Work has always been the lot of women—whether in the home, or in the aircraft assembly plant, or in the New Orleans whorehouse. In some cases, work has meant salvation for women but in others, sadly, it has represented just another, more severe, form of exploitation. In "Letters from Storyville" by Natasha Trethewey, a small town girl leaves for the city and for opportunity. She is enticed into a house of prostitution where she is paraded around like a piece of meat and auctioned off for the night where "in my borrowed gown I went upstairs with the highest bidder." Another aspect of working women with their high-pressure urban life is described in "Worked Late on a Tuesday Night" by Deborah Garrison who presents the "Little Miss Phi Beta Kappa" as stressed, starving and guilt-ridden for the time she doesn't spend with her children and the love she doesn't make with her husband.

Deathappears in Death and Grief

Death is an inevitability that strikes the poets whose work is represented in this collection as fearsome, threatening, sad, lonely, and even beautiful. To Sappho, the ancient Greek lesbian poet, Death is "an evil," an ugly counterpoint to the pleasures and accomplishments of life, in "We know this much." To Elizabeth Barrett Browning in "Grief," death is something to be endured British-style with a stiff upper lip and no unseemly displays of emotion. For the widow who narrates "The Widow's Lament in Springtime" by William Carlos Williams, "sorrow is my own yard." Death of one's enemy in wartime, according to Walt Whitman in "Reconciliation," is "beautiful as the sky,"

Woman as Friendappears in Friendship

Women's capacity to form enduring relationships of all kinds—especially friendships—is just one of the ways they manifest their unique way of combining body and soul. These poems demonstrate and celebrate the friendships women form with each other, with animals, with their children and with men. It is probably in women's ability to form and sustain relationships that men have the most to learn from the feminine side of their own personalities. Nikki Giovanni in "A Poem of Friendship" and Roy Croft in "Love" both see in their friendships with women a transformational power that activates their own powers of love. Giovanni finds her friendship makes her capable of love because of the love they share but do not make, "because of what we are together." Croft loves his friend "not only for wht you are, but for what I am with you."

Inner Peaceappears in How to Live

The message from the poems in this section is to throw one's heart and soul into every undertaking and into every day, or, carpe diem. Whether work, study, relationships or play, committing to a full life leads to inner satisfaction and inner peace, as expressed by David Lehman ("May 2"), Ralph Waldo Emerson ("From a Letter to His Daughter"), and Marge Piercy ("To be of use"). Perhaps W.H. Auden expresses this abandonment to life in "Leap Before You Look," in which he equates a sense of danger with living life to its fullest, and eventual peace. "Our dream of safety has to disappear," he tells his beloved. "To rejoice when no one is there/Is even harder than to weep." In "May today there be peace within," St. Teresa of Avila exhorts readers to "trust God that you are exactly where you are meant to be" so that you can "allow your soul the freedom to sing, dance, praise and love."

More summaries and resources for teaching or studying She Walks in Beauty: A Woman's Journey Through Poems.

She Walks in Beauty: A Woman's Journey Through Poems from BookRags. (c)2022 BookRags, Inc. All rights reserved.