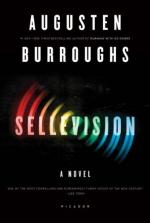 Augusten Burroughs
This Study Guide consists of approximately 33 pages of chapter summaries, quotes, character analysis, themes, and more - everything you need to sharpen your knowledge of Sellevision.

This detailed literature summary also contains Topics for Discussion and a Free Quiz on Sellevision by Augusten Burroughs.

Sellevision is a home-shopping network that has several popular hosts and a great deal of drama. The hosts seem to be under a tremendous amount of pressure to sell items while keeping their lives on an even keel.

As the story opens, Max Andrews is being fired after an incident in which he "exposed" his penis during a broadcast. Max objects that he didn't "expose" himself, but that it "peeked" out. When Max later goes to a nearby mall in search of a specific gift for his niece, a child recognizes him from the "penis incident" and cries out that Max had shown her his "thingy." Security is called and Max barely escapes arrest. Over the coming weeks, Max tries out for several jobs but the circumstances of his being fired from Sellevision follow him. It's by chance that Max sees a daytime talk show interview with a porn star. Max looks up the company and a year later is awarded the industry's top recognition for new star in a gay movie.

Peggy Jean Smythe, another of the show's most popular hosts, is often the host for the segments involving faith-based jewelry and items. Peggy Jean claims three boys and often says there are "four if you count my hubby." The family attends church regularly and Peggy Jean touts her ability to have a career, remain active in things such as her sponsorship of two AIDS babies. When a stalker begins to terrorize Peggy Jean, she uses the excuse to turn more frequently to Valium and alcohol. The stalker turns out to be her oldest son, angry because of Peggy's treatment of him, but Peggy Jean doesn't learn this until after she's sent to a rehab to face her addiction. While there, her husband becomes sexual with a sixteen-year-old neighbor and Peggy Jean's arrival from the rehab one day early allows her to catch the two in the act. She's fired from Sellevision and writes a book, taking to the home-shopping circuit to sell the book.

Another of the hosts is Bebe who meets the man of her dreams, Eliot, only to fear briefly that Eliot is actually her own brother, given up for adoption as a baby. When this proves untrue, Bebe and Eliot marry and have a son, though their duplex burns to the ground while Bebe is in the hospital, the fire started because of Bebe's compulsive shopping which means there are too many items plugged into a single outlet.

Others on the show include Howard Toast, married producer who has an affair with Sellevision host Leigh, until Leigh figures out that Howard is never going to leave his wife. Leigh's announcement on the air that Howard is having an affair and that she's ending it now prompts both to be dismissed from the show though Leigh finds the strength to truly end the affair though Howard's marriage is now truly over. As the show goes on and hosts settle down to new roles, Trish Mission - an up-and-coming star on the network - has an accident in which a chocolate milkshake is spilled on her blouse. She trades blouses with a co-worker but goes on the air without a bra. During her segment, she leans forward and her left breast falls out of the shirt.

More summaries and resources for teaching or studying Sellevision.