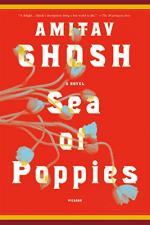 Amitav Ghosh
This Study Guide consists of approximately 95 pages of chapter summaries, quotes, character analysis, themes, and more - everything you need to sharpen your knowledge of Sea of Poppies.

This detailed literature summary also contains Quotes and a Free Quiz on Sea of Poppies by Amitav Ghosh.

The following version of the book was used to create this guide: Ghosh, Amitav. Sea of Poppies. Picador. 2008.

Sea of Poppies opens with a vision Deeti, an Indian poppy farmer, sees of a ship although she's never seen the sea. The plot focuses on the journey of Deeti and several other characters to reach the Ibis, a former slave ship turned migrant transporter, for a trip across the ocean to Mauritius, a penal and plantation colony of the British Empire. A British-owned company, The Burnham Bros., purchased the Ibis hoping to refit her for the opium trade. The novel unfolds with the threat of war with China over opium in the backdrop and amid the changing relationship Indians have with their land because of poppy farming. The novel follows the personal journey of a multi-racial, multi-ethnic cast of characters, showing how all of their lives are affected by the humble poppy.

Through the course of the novel, Deeti's life in India falls apart and she embarks on a journey across the ocean to Mauritius as an indentured worker. Her husband, an opium addict, dies and since Deeti has no male children to inherit her land she must either marry her brother-in-law or lose her land. She contemplates ritual suicide, but Kalua, a lower-caste ox cart driver, rescues her and they escape, eventually boarding the Ibis together. A second narrative stream follows Zachary Reid, a half black American sailor who sails on the Ibis from Baltimore and then disguises himself as a gentleman after most of the crew dies or deserts and he hires lascars to replace them. Zachary has a budding romantic interest in Paulette, an orphaned French girl. Nearly forced into an arrange marriage with an older English judge, Paulette escapes Calcutta by disguising herself as an old Indian woman and boards the Ibis as a migrant worker. Still another narrative stream follows Raja Neel Halder, a high-caste Indian, who lives in luxury until he's found guilty of forgery and send to Alipore Prison. In prison he meets Ah Fatt, a Chinese convict and opium addict, and the two board the Ibis together headed for the English penal colony at Mauritius. Baboo Nob Kissin, an Indian agent who handles indentured workers, transforms into a spiritual leader and boards the Ibis hoping to build a shrine. Near the end of the novel, when all of the characters and their fates have converged on the Ibis, Kalua accidentally knocks a guard overboard while others are trying to rape Deeti, his wife. Then the guards aboard the ship tie Kalua to the mast and begin whipping him. In the novel's climatic scene Kalua bites through his fetters while he's being lashed and then grabs the whip, killing the man who was whipping him. The journey on the Ibis transforms characters, helping them leave behind former identities, and it unifies them. Sea of Poppies is the first book in a three-book series and so ends in a cliff hanger, with several characters escaping the Ibis in a longboat.

More summaries and resources for teaching or studying Sea of Poppies.