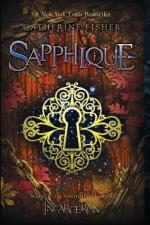 Catherine Fisher
This Study Guide consists of approximately 33 pages of chapter summaries, quotes, character analysis, themes, and more - everything you need to sharpen your knowledge of Sapphique.

Sapphique is one of the novels in the Incarceron series by author Catherine Fisher. The story follows the characters that are living in two separate worlds - one set of characters in the realm and the other in Incarceron. The characters and the two worlds are separated by a door, which is the portal. Only one of the characters, Jared, knows how to find the portal and how to open it so that the characters can transition from one world to the next.

When the novel opens, the reader is not aware that Attia and Rix are stuck in the world that is known as Incarecon. Incarceron is the world where a prison with the name of Incarceron is in control of everything that happens in that world. Attia is a young owman that is involved with Finn, who is a former prisoner at Incarecron. Somehow, but unbeknownst to the charcetres in the book, Finn was able to escape Incarceron and he now lives in the other world, which is the realm. Finn is the future king as Prince Giles. He is engaged to be married to Claudia, who is also the daughter of the warden of Incarceron, and the future queen.

Back in Incarceron, Attia is traveling with a magician and illusionist, by the name of Rix. Rix claims to possess a magical glove, which was the creation of a famous prisoner of Incarceron, who goes by the name of Sapphique. Attia is trying to find Finn, who disappeared without coming back and Attia doesn't know where he has gone.

Back in the realm, a boy has showed up saying that he is the real Prince Giles. This leads to investigation into both of the proclaimed princes. Claudia continues to try to find the portal to Incaerceron with her tutor Jared because her father is stuck in Incarceron. Eventually, it is determined that Finn is the real Prince Giles. When the portal is opened, the realm turns out to be an illusion, where what everyone sees is not actually how the world is. While Claudia does temporarily reunite with her father in Incarceron, she ends up returning to the realm to rebuild the land with Finn.

More summaries and resources for teaching or studying Sapphique.