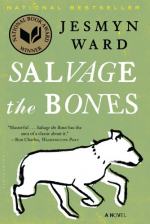 Jesmyn Ward
This Study Guide consists of approximately 29 pages of chapter summaries, quotes, character analysis, themes, and more - everything you need to sharpen your knowledge of Salvage the Bones.

Salvage the Bones: A Novel Summary & Study Guide includes comprehensive information and analysis to help you understand the book. This study guide contains the following sections:

This detailed literature summary also contains Topics for Discussion on Salvage the Bones: A Novel by Jesmyn Ward.

'Salvage the Bones" is a woman's coming-of-age story in the face of a devastating hurricane, written by Jesmyn Ward. Esche lives near the small Mississippi town of Bois Sauvage. Her family is extremely poor, and she lost her mother to the birth of her youngest brother, Junior, many years ago. This tragedy caused her father to become an alcoholic, and as a result the siblings—herself, Randall, and Skeetah, who are both older than her, and Junior—have extraordinarily strong bonds and interdependencies between them. Skeetah, in particular, who Esche seems closest too in many ways, has a peculiarly nurturing side to him, and in fact the novel opens with him helping his dog, China, give birth to a litter of puppies. The significance of these puppies is soon very apparent, though Skeetah does plan to sell them as fighting animals. While Skeetah tends to the puppies and Daddy makes light preparations for the coming hurricane, Esche discovers that she is pregnant, and she knows who the father is, but does not know how to tell the other boy, Manny, in a way that will make him care.

Esche becomes increasingly involved in helping Skeetah care for the puppies, and eventually, when one becomes sick with Parvo, Skeetah decides to steal dewormer from the barn of a white neighbor. The puppies assume great significance with the siblings, because they will be worth a great deal of money when sold, but they are even more important to Esche because she constantly equates China's motherhood to her own future, and has a profound respect for China's ability to handle the situation. When the children return from stealing the dewormer, Manny, the father of Esche's child, arrives, and suggests how to get China to take it. China becomes sick for several days as a result, which deeply worries Skeetah and leads him to believe that Manny intentionally gave him bad instructions in order to poison the dogs.

Meanwhile, Daddy has made very slow progress trying to prepare for the hurricane, and enlists Randall's help in using a tractor to help tear down the chicken coop for scrap that they might need to board up the house. Randall, who has never driven the tractor before, accidentally severs his father's fingers during an attempt to free the tractor from a mess of chicken-wire. He is rushed to the hospital by the siblings and their friend Big Henry, but the fingers are permanently lost, and Daddy is given pain pills which he mixes with alcohol, which completely incapacitates him. The siblings take China to a dog fight where her puppies father is, and Skeetah becomes so angered at Manny he allows China to fight Manny's cousin's dog, Kilo. China emerges victorious, but the children must rapidly prepare for the hurricane—now named "Katrina"—when they return.

The day of the hurricane finally arrives, and the family quickly realizes they are totally unprepared for the level of disaster it brings. Their house is flooded, and they must climb and swim through dangerous weather in order to reach a neighbor's house on the hillside, but they lose all of the puppies and China in the process. They take refuge in the attic of the storm, and make their way into town the next morning, except for Skeetah, who returns to wait for China's return, because he is convinced she survived the ordeal. It also comes out during the hurricane that Esche is pregnant, which causes her father to quickly re-evaluate his life. The end of the novel brings hope in the face of a great tragedy.

More summaries and resources for teaching or studying Salvage the Bones: A Novel.

Salvage the Bones: A Novel from BookRags. (c)2022 BookRags, Inc. All rights reserved.