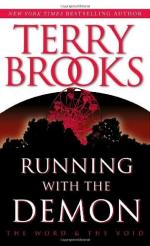 Terry Brooks
This Study Guide consists of approximately 31 pages of chapter summaries, quotes, character analysis, themes, and more - everything you need to sharpen your knowledge of Running with the Demon.

Running with the Demon Summary & Study Guide includes comprehensive information and analysis to help you understand the book. This study guide contains the following sections:

This detailed literature summary also contains Topics for Discussion on Running with the Demon by Terry Brooks.

John Ross dreams of a town called Hopewell, Illinois, which has been devastated by an unspecified disaster. Something horrible has happened to the town and the people he knew there. Nest Freemark is in bed, sleeping, when she is awoken by Pick, a sylvan or woodland creature that resembles a piece of wood. He tells her that Bennett Scott, the sister of Nest's friend Jared Scott, is trapped by the feeders in Sinnissippi Park. Nest goes to save the girl. She tells her grandmother, Evelyn, about this the next day. Like her mother, Caitlin, and grandmother, Nest has magic she uses to protect the park. She does not know who her father is. Her grandfather, Old Bob, used to work at Midwest Continental Steel, until a strike happened. Many workers have not worked in some time, and the town is becoming depressed. The demon follows Derry Howe and Junior Elway, influencing them. The demon suggests if an accident happened at the factory, the company officials would change their mind and work with the union. Nest leaves her home, thinking about how she has been able to see the feeders from birth.

Her grandmother, Evelyn, is wary of Wraith, until she connects with him and realizes he is there to protect Nest. She meets an Indian, Two Bears, who helps her see a vision of Evelyn dancing with the feeders. Evelyn says she once fell in love with the demon, but escaped his evilness. Nest meets John Ross, who says he will help her. He has tried to protect humanity for ten years now. Pick tells Nest about the maentwrog, an evil being trapped in an oak tree. Nest Freemark wonders if John Ross is her father. John says he does not have magic to heal the tree, and realizes the demon is trying to create a distraction. During a picnic, Nest is kidnapped by Danny Abbott, a boy she spurned, while John is attacked. Old Bob goes to find Nest, leaving the demon a chance to kill Evelyn. Before she dies, Evelyn leaves a note for Nest, telling her to use her magic and trust Wraith. John tells Nest that the demon is her father, and he has come to turn Nest into a demon as well. Nest meets the demon but denies him, using her magic against him so Wraith attacks him. Derry and Junior are killed by the bombs they planted. Pick tells her that Gran must have used all her magic to change Wraith to protect Nest when she used her magic. John Ross awakes, and tells her she will not become what he saw in his dream. He tells her he would have done whatever he had to to change the future.

More summaries and resources for teaching or studying Running with the Demon.

Running with the Demon from BookRags. (c)2022 BookRags, Inc. All rights reserved.