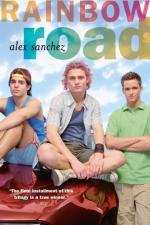 Alex Sánchez
This Study Guide consists of approximately 26 pages of chapter summaries, quotes, character analysis, themes, and more - everything you need to sharpen your knowledge of Rainbow Road.

Rainbow Road is the third novel in the Rainbow series by Alex Sanchez. In this novel, Nelson, Kyle, and Jason decide to take a road trip when they learn that Jason has been asked to speak at the opening of a new lesbian/gay high school in Los Angeles. Along the way, Jason and Kyle struggle with their relationship as they hit obstacle after obstacle, while Nelson continues his search for love. In the end, Jason discovers that although he did not like some of the things they did and saw along the way, that the trip was an important part of his journey of self-acceptance. Rainbow Road is an eye opening, coming of age story that brings a happy conclusion to the series for its many fans.

Jason tells Kyle that he has been invited to speak at a new lesbian/gay high school in Los Angeles based on his fame the previous spring when his coming out became public. Kyle is thrilled for Jason. It is Nelson, however, who comes up with the idea of instead of Jason flying to Los Angeles alone, that the three of them drive. At first Kyle does not like the idea because he is worried that Jason will not be comfortable being in a car for two weeks with Nelson. However, Jason loves the idea and everything quickly falls into place.

On the first day of the trip, Nelson oversleeps and puts them behind schedule. As they leave town, Nelson lights up a cigarette, annoying Jason. Kyle's fears seem to be coming true mile by mile. However, when they reach the first campground that night where they plan to spend the night, Nelson provides some alcohol and this seems to draw him and Jason closer while Kyle sits back in displeasure. The next morning, Kyle pours out the alcohol to prevent Nelson from drinking any more.

The next day, Jason accidentally allows the car to run out of gas as the trio are on their way to the Radical Faeries sanctuary. Fortunately, they are picked up by two of the faeries, one of whom has horns and with whom Nelson quickly falls in lust. At the faerie sanctuary, the trio is invited to a campfire party. Nelson imbibes in some illegal smokes while Jason finds himself fascinated with the topless females walking around, again causing Kyle to not only feel uncomfortable, but placing him in the role of the one responsible member of the group.

The group moves on, stopping in Nashville and then Memphis. Kyle discovers that he has lost his wallet, along with two hundred dollars of their traveling money and his driver's license. Although Kyle feels badly about this, Jason is relieved because Kyle has never messed up before and Jason feels as though this mistake places them on more even footing.

The next day, the boys meet a teenage transsexual who is on her way to a Britney Spears look-alike contest. Nelson and Kyle offer the girl, BJ, a ride to New Orleans. In exchange, BJ offers the boys a place to spend the night. Nelson allows BJ to dress him up like Britney so that he might compete in the contest as well and they all go to the bar. Jason is uncomfortable, as is Kyle, but Nelson has a grand time.

The following day, the boys stop in Texas and decide to go to a bar. There they meet a couple of girls who are bisexual. When Kyle leaves the club to get some air, he is shocked when he returns to find Jason kissing one of the girls. The following day, while Kyle and Jason are still fighting, they meet a gay couple who have been together for twenty years. Despite their anger, Kyle and Jason both find themselves thinking about their relationship and the possibility of it lasting a long time.

Before they reach Los Angeles, Nelson overeats at an all you can eat restaurant and suffers food poisoning. After a brief stay in the hospital, the boys continue their journey. Once in Los Angeles, Jason finds himself suddenly faced with having to write and perform a speech, something he has put off all through the trip. Instead of writing a speech, Jason speaks from the heart, inspiring the crowd with his thoughts on his own struggle with his sexuality.

Nelson falls in love with Manny, a young man who works at the school and who recommended Jason to the principal in the first place. Manny invites Nelson to remain in Los Angeles. After some soul searching, and a conversation with his mom, Nelson agrees. Jason and Kyle make the four day trip home alone, more confident in one another and better prepared for the future.

More summaries and resources for teaching or studying Rainbow Road.