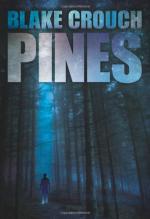 This detailed literature summary also contains Quotes and a Free Quiz on Pines by Blake Crouch.

Pines is a science fiction thriller by Blake Crouch which follows the efforts of Secret Service Agent Ethan Burke to escape from the town of Wayward Pines, Idaho. When the novel begins, Ethan has come to Wayward Pines in pursuit of two missing secret services agents. But when he wakes up outside of town near a river with temporary amnesia, the locals are not forthcoming with answers to his questions. Ethan begins to realize quickly that something is wrong with the town when the one road out actually circles back around to town, and when the people of town –including the sheriff –begin seeking to block his efforts to leave or do his job. Ethan meets a woman named Beverly, who reveals she went missing one year before –in 1985 –while Ethan believes the year to be 2012. Beverly is soon after ripped apart by a mob in town on the orders of the people who run the town, and Ethan flees into the wilderness, where several humanoid creatures attempt to kill him. He then breaks into a massive complex, where he discovers a secret base for the people who run the town. Ethan is then captured, and it is revealed to him by David Pilcher, the man responsible for everything, that Ethan and the others have all been in suspended animation for nearly 1,500 years. In that time, humankind has rapidly evolved into humanoid creatures, and civilization is gone –except for Wayward Pines, where Pilcher has preserved the species homo sapiens, and where Pilcher has expanded the human race from some 650 people to over 800 –and intends to keep going. It is the last town on earth. Ethan agrees to stay on as sheriff in the town, and he is reunited with his wife and son soon after.