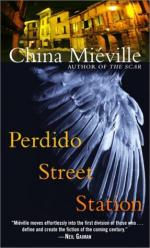 New Crobuzon, "a huge plague pit" within the rib bones of some ancient and extinct creature—a "great carcass"—is the center of action and focus of the lives of the central characters. This nightmarish metropolis is inhabited by countless creatures who bear silent witness to a major genetic drift in the stream of evolution. The air and the earth above and below New Crobuzon teem and ooze with the struggle for survival. Thirty-story buildings mark the skyline "like fat fingers, like fists, like the stumps of limbs waving frantically above the swells of the lower houses. It is altogether a creepy place inhabited by creepy creatures.

Runagate Rampant is a counter-establishment newspaper edited by Benjamin Flex, whose printing press is destroyed by the militia when it puts down a dock strike by the Vodyanoi. Flex, because he supports the strikers, becomes...