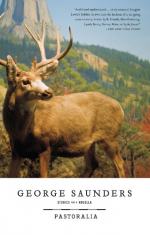 George Saunders
This Study Guide consists of approximately 67 pages of chapter summaries, quotes, character analysis, themes, and more - everything you need to sharpen your knowledge of Pastoralia.

This detailed literature summary also contains Quotes and a Free Quiz on Pastoralia by George Saunders.

The novella “Pastoralia” takes place in a specific exhibit in a larger entertainment complex. The protagonist works in the exhibit portraying a caveman in a large fake cave. His coworker, Janet, portrays a cavewoman. Despite the fact that not many patrons come through their exhibit anymore, Janet and the protagonist are forbidden from dropping character. However, Janet often drops character and speaks in English while in the exhibit. She even speaks to guests sometimes. The protagonist never breaks these rules, but each day, when he writes his mandatory coworker evaluation regarding Janet’s work performance, he does not report her infractions.

Janet and the protagonist do not leave the exhibit after each work day. Instead, they each have a separate room adjacent to the exhibit where they eat and sleep when the exhibit is not open. The protagonist has a wife and children. He communicates with them via fax machine. His three-year-old son Nelson has an undiagnosed illness that causes pain and stiffness in his muscles. The protagonist and his family are steadily sinking into deeper debt. Janet has a sick, elderly mother who is cared for by a neighbor.

One day, an executive named Greg Nordstrom takes the protagonist to brunch and talks about a round of firings that the company will be implementing soon. He implies that he wants to fire Janet and that he needs the protagonist to report her poor work performance so that her employment can be terminated. The protagonist tells Janet about this conversation, and Janet says that she will work more diligently.

Janet works diligently for the next two days, but on the third day, her drug-addicted son Bradley comes to the exhibit. Janet talks to him, and he begs for money from her. She gives him $20, and he leaves. The protagonist decides not to report Janet’s infractions that day. However, Bradley uses the money to buy drugs, and he is arrested. He is soon sentenced to ten years in prison. Janet is devastated when she learns of this via fax. The next day, a family with a poorly behaved child comes to see the exhibit. Janet begins to angrily argue with the child’s father, and she even curses at him. The man says that he is going directly to the manager’s office to report Janet. The protagonist feels that he has no choice but to report Janet’s infraction in his daily evaluation of her.

Janet is fired, and Nordstrom commends the protagonist on his actions. The protagonist soon receives a company-wide memo that seems to imply that there will be more firings. Janet is soon replaced by a new hire named Linda, who is a very diligent worker. The story ends with Linda and the protagonist working diligently in the cave.

In “Winky,” Neil Yaniky attends a self-help seminar led by a man named Tom Rodgers. In the seminar, Tom states the idea that the only way to gain success and inner peace is to cut ties with anyone in one’s life that would ask for inconvenient favors. Tom says that this is necessary even if those favors are highly important for that person’s wellbeing. Neil then receives personalized instruction at the seminar. His goal is to demand that his eccentric sister Winky move out of his apartment and live somewhere else. Neil believes that Winky’s presence is the main obstruction regarding his personal success and his love life. The narrative conveys a brief scene in which Winky is doing chores at the apartment. Her personality is generally governed by selflessness and extreme happiness. As Neil walks home, he fantasizes about wealth and power, and he believes that ejecting Winky from his apartment will be the first step in attaining that success. However, when he arrives home, he loses the will to demand her to leave. He instead devolves into a state of quiet but intense resentment.

In “Sea Oak,” the protagonist lives with his sister Min, his cousin Jade, and his aunt Bernie in a small, low-quality apartment in a complex called Sea Oak. The apartment is situated in a dangerous area. The protagonist makes money working as a waiter and stripper at an erotic restaurant called Joysticks, and 60-year-old Bernie works at a drugstore called DrugTown. Min and Jade do not work, and are both single mothers. One day, Bernie dies without any clear cause, and she is interred at a nearby cemetery. One day, it appears that her grave has been exhumed and her body has been stolen. However, Bernie then appears in undead form at the apartment. She has come back to life because she wishes to live the life of extravagance that she never had. Her personality has changed from one of equanimity to one of anger and avarice. She orders her family to make more money in specific ways. However, she steadily decomposes, and she soon dies permanently. The protagonist decides to continue making as much money as possible so that he and his family members can move to a better apartment in a safer area.

In “The End of FIRPO in the World,” a boy named Cody rides his bicycle through his neighborhood. He is about ten years old, and he is filled with rage towards his neighbors, his mother, and his mother’s boyfriend Daryl. He is often criticized and taunted by his mother and by Daryl, and his neighbors are often angry with him due to his misbehavior. Chastisement from the neighbors then makes him even angrier and more resentful. Cody decides to vandalize the home of the Dalmeyer family, as the children of the family recently yelled at Cody and taunted him. However, before Cody can do so, he is hit by a car. He lands on the ground, bleeding profusely, and as he dies, he imagines himself apologizing to his mother for being a disappointing son.

In “The Barber’s Unhappiness,” the protagonist is a middle-aged barber who owns a barbershop and lives with his elderly mother. He is single and rather lonely, but he also holds rather shallow views towards women. He has dated women in the past, but he has never married due to various shallow reasons concerning the women’s bodies. He takes a driver’s education class, and he grows attracted to a young woman in the class who has a pretty face. However, when she stands up from her seat, he realizes that she is overweight. Nonetheless, he asks her out on a date. Her name is Gabby. The barber’s mother, who is possessive and manipulative, frequently comments to the barber about Gabby’s weight. At the end of the story, the barber internally decides that he and Gabby will only be able to be together if she agrees to lose weight.

In “The Falls,” a man named Morse is walking home from work to his small rental house, where he lives with his mother and two children. He crosses paths with a man named Cummings, who is middle-aged, single and lives with his mother. The two do not speak as the cross paths. Morse’s internal monologue reveals that he is a rather anxious person and worries about the precarious financial security of his family. Cummings’ internal monologue reveals that he is rather pretentious and that he aspires to one day gain wide renown as a writer and intellectual. The two men see a canoe floating down a nearby river. It contains two young girls who do not have oars. The canoe falls over a waterfall and partially splits. The canoe begins to sink with the two girls in it. Morse and Cummings both panic. At the end of the story, Morse jumps into the water top try to save the girls.

More summaries and resources for teaching or studying Pastoralia.