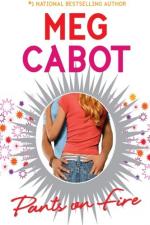 Meg Cabot
This Study Guide consists of approximately 20 pages of chapter summaries, quotes, character analysis, themes, and more - everything you need to sharpen your knowledge of Pants on Fire.

This detailed literature summary also contains Topics for Discussion on Pants on Fire by Meg Cabot.

"Pants on Fire" is a novel by author Meg Cabot. In this novel, Katie Ellison is surviving the summer between her junior and senior years of high school. Katie has had it all up until now. She's dating one of the cutest and most popular boys in school, Seth Turner. Katie and Seth have been dating since the ninth grade, but lately, she has also been kissing one of the other guys on the high school football team, Eric Fluteley. Katie's seemingly perfect life gets turned upside down when her childhood friend returns, Tommy Sullivan.

Not only does Tommy Sullivan's return make Katie start questioning her feelings for him, but it also causes a town scandal. Tommy Sullivan was initially run out of town because as a junior high school reporter, he worked with the local newspaper to expose a cheating scandal. The famous football players of the championship high school football team cheated on their SATs and Tommy Sullivan exposed them all. After causing the team to forfeit the state championship, little Tommy Sullivan became the most hated kid in town. While he moved away to escape it, now he's back and the town hasn't forgotten.

In the end, Katie realizes that telling the truth can actually set her free. She admits many things to herself, but she also starts to tell the truth to Seth and the rest of the town. Her decision will change Katie's life forever.

More summaries and resources for teaching or studying Pants on Fire.